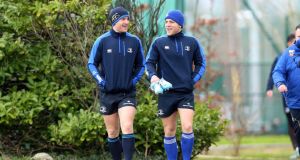 Luke Fitzgerald negotiated his return from an abdominal injury last weekend with no adverse effects and he is likely to form part of Leinster coach Matt O’Connor’s plans for Saturday’s RaboDirect Pro12 clash with the Glasgow Warriors at the RDS.

Leinster team manager Guy Easterby confirmed that he is expecting to have a number of players returning from the national squad to supplement a young side that went to Cardiff and came away with an impressive bonus point victory.

He admitted of Fitzgerald’s return to competitive action: “He came through fine. We have to be careful with him in his return to play. As amazed as I was by the surface in Cardiff - it was the best I have seen in terms of those synthetic pitches . . . But we were pleased with the way that he came through.”

Easterby accepted that Fitzgerald would like another opportunity this weekend to try and clamber back up the pecking order. “He was very close to selection for the first game against Scotland I would imagine. He’ll be looking to back up his performance from last week and getting himself back in the mix.

“Obviously there as a small bit of rustiness there [in Cardiff], I guess. His performance levels before he got his injury this season have been outstanding. Joe [Schmidt] knows Luke very well and knows what he can deliver and what he will deliver on the big stage when hopefully he gets back into the mix. He was very unlucky at the start of the campaign to miss out.”

Ireland’s wings in the opening three matches of the Six Nations, Dave Kearney and Andrew Trimble, have certainly grasped the opportunity presented to them and it’ll take something exceptional to oust them at this point.

Easterby knows that Saturday’s game against the Warriors will provide a little bit more definition in terms of the top of the table. “That top five has gone away from everyone else.

“What it means is that it is vital that you win your home games but, secondly, that you win those games against the guys in that top five . . . For us the Glasgow game is a huge game: they are in the top five and they have a few games in hand on everyone else.”

Leinster will train again this afternoon after which an injury update will be released and presumably an indication about whether they will be able to call upon Jack McGrath, Seán Cronin, Martin Moore, Fergus McFadden and Leo Cullen.