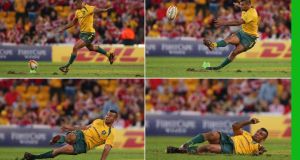 Kurtley Beale of the Wallabies slips as he tries to kick what would have been a match-winning penalty against the Lions at Suncorp Stadium in Brisbane. Photograph: Chris Hyde/Getty Images.

Saturday’s opening salvo of the Lions 2013 Oz Odyssey, not unexpectedly, had encouraging reminders of their last series win 1997; despite being comfortably outscored in tries by dint of accommodating Neil Jenkins at fullback while the Springboks gambled on having no specialist place-kicker.

And whereas a dozen years ago Jonny Wilkinson’s 56 per cent return was costly for the Lions in a series in which each side scored seven tries, on Saturday, Leigh Halfpenny’s five from six for a 13-point haul trumped four from nine between James O’Connor and Kurtley Beale in a game where both teams scored two superbly-crafted tries apiece.

Four years ago, of course, South Africa won the pivotal second Test through a late Morne Steyn penalty, so perhaps the Lions’ luck has changed.

‘A big call’
“We were a bit unlucky in 2009,” recalled Warren Gatland yesterday who was an assistant coach in South Africa. “It was a big call by the referee to give a penalty in the last minute, right on full-time.

“The problem with Test match rugby is that there is nothing in between. It is either agony or ecstasy. The ecstasy for us is that we have won the game but if that kick had gone over, we would be in a completely different mental edge today.”

Ultimately, this game hinged on Kurtley Beale’s standing leg slipping in the turf, having decided to wear ill-suited moulded studs.

“We’ve had these issues a lot with our players with Wales in the Millennium Stadium,” said Gatland. “It’s quite a slippery surface and on a lot of occasions we’ve said to players make sure they have the right footwear because it is a slippery surface and you have turn up with the right tools. It’s part of your job making sure that you are prepared.”

Even so, it’s hard to not to believe the Lions have played their get-out-of-jail card.

They were the better side in many ways. Initially on top at scrum time from the seismic ninth minute when their concerted shove at scrum time sent the Wallabies sliding back in the turf, a la the Waratahs, they were offered unfettered front-of-the-line and duly took it, either mauling very effectively, using Mike Phillips’s long pass to play from midfield or setting up second phase through Tom Youngs, as they did when clinically exploiting the injury enforced reshuffle which saw flanker Michael Hooper employed at centre for Alex Cuthbert’s try.

For long stretches, they seemed in reasonable control, retaining possession through the phases with effective clearing out, and keeping a good shape in attack and defence.

George North was within a whisker of a second try to add to his stunning solo effort when Berrick Barnes kicked down his throat and the winger left Pat McCabe and O’Connor for dead before doing Barnes like a kipper to become the youngest Lions Test try scorer in over 50 years.

Yet they were mugged twice, thanks in the main to Will Genia, the smallest player on the pitch but who stood head and shoulders above everyone else in the Wallabies’ ranks with his wit and vision.

He’s a hard man to stop, and the Lions filled his favoured blind side channels effectively, but as with Ireland, the Lions have to come up with a better plan to close him down, as Ben Mowen did with Mike Phillips.

Quick tap
The latter was turned inside and out by Genia’s quick tap, 50 metre run and cheeky little chip for Israel Folau to become the first player to score a try on a Test debut against the Lions since Percy Montgomery in 1997.

Genia was creator in chief of the space which allowed Folau to go past Jonny Sexton, Alex Corbisiero and Leigh Halfpenny with his lethal, gliding cocktail of footwork, hand-off and acceleration.

“He is an absolute freak,” said Genia. “We talked him up all week, and he just came out and proved it. He’s a big game player and he’s used to playing on the big stage. He enjoyed it.

“He was outstanding for us tonight. He is a great guy to play with. He will find space, He will break the line. You saw him carry; he carried four blokes with him at one stage and made about 10 metres. We are just lucky he’s on our side.”

The same could be said of him though, and stopping the little genius that is Genia as the Irish backrow and Conor Murray did is imperative.

Phillips passed well but save for one burst had less impact than usual, and his over-long box kicking gave the Wallabies ample opportunity to counter.

Outside him, Sexton played well, his tactical kicking always helping the chase, twice finding space to re-gather his own chips, and running the line well, but while the Lions’ backs were potent, they need more carrying up front – Tom Croft made the most metres of any Lions forward with just 27.

If they are as intent as they seem on taking every three-point opportunity going then they may need to adopt deliberate knock-ons at the base, a tactic patented by George Gregan.

Also, Gatland and Graham Rowntree might not be in such a rush to change their frontrow so prematurely, and particularly replacing Adam Jones with Dan Cole.

In the heel of the hunt, helped by an indifferent Kiwi referee, whose utter inconsistency at the breakdown saw him reduce O’Driscoll to a wary spectator before pinging O’Connell for a legitimate steal but then pinged Croft for holding on when Ben Douglas was even lower and flatter to the ground, Australia had two kickable penalties to win.

Flanker in midfield
And this after the under-cooked Wallabies lost backs in the first, 39th and 48th minutes, at which point they had a flanker in midfield, and even finished with a scrumhalf on the wing. The courage they showed in remarkable circumstances was unprecedented.

The flagship rugby union team of this proud sporting nation will regroup and rebound. They are wounded and cornered. That makes them dangerous.