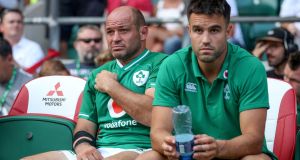 The grand old fullback has long been criticised for not developing a creative streak to go with other fine attributes but the skip pass leading up to Larmour’s try showed even at 33 an elite player can improve. Rating: 6

Did himself no favours when it comes to forcing his way into the starting line up with five missed tackles. Under pressure now to make the 31-man squad. Rating: 4

Kept probing the white forcefield but utterly out played by his opposite number as Manu Tuilagi’s rampant performance gives England a genuine opportunity to win this World Cup. Rating: 4

Central figure in passive midfield defence. Nice fend on Elliott Daly and dive finish for his try but in Japan it has to be Robbie Henshaw or Chris Farrell at inside centre. Rating: 4

Remains Ireland’s primary attacking weapon but the first three tries came when he stepped off his wing and he was humiliated by Joe Cokanasiga, an inexcusable missed tackle, for the Fijian’s 65th minute try. Rating: 3

Failed his big examination. On 51 minutes Luke McGrath passed into the 22 and with Maro Itoje blocking out the sun Byrne kicked straight into touch. Also threw plenty of hospital passes. Rating: 3

Signs of the 2017 version of himself disappeared after Jonny May’s arm to head contact left him prone on the grass. Returned after passing the Head Injury Assessment but this was due to a breakdown in communication by the Ireland management. Removed at half time. Rating: 4

Damaged right ankle provides opportunity for Jack McGrath. The veteran prop was struggling to cope with Kyle Sinclair’s scrummaging before limping off on 39 minutes. Rating: 5

Time catches everyone and the 37-year-old captain looks to be in major trouble. Henderson must carry partial blame for the malfunctioning lineout but at least four of Best’s throws were atrocious. Suddenly he’s droppable. Rating: 3

Needed to bring a power surge when carrying ball but Sam Underhill’s dump tackle and dislodging of possession on 47 mintues was this Test match in microcosm. Rating: 4

Encouraging rips and turnovers but he was calling the lineout and Ireland got thumped because their set piece was unacceptable for a team with aspirations of the highest honours. reduced to an impact role after this. Rating: 5

Being big and strong is irrelevant when you are put into the arena with Maro Itoje and George Kruis. Nowhere near the standard. Rating: 3

The Munster captain is not the problem. Recovered from a belt to the jaw on 19 minutes to fight manfully in the face of a superior backrow. Rating: 6

Noticed him being run over by Tuilagi and grappling English bodies with low hits (14 of them) but unseen in the collisions that truly matter. Dan Leavy and Seán O’Brien could have been to Ireland what Curry and Underhill are becoming for England. Rating: 5

The Portugal camp must have been rough. Miles off the pace. Flung one important pass to ground in Ireland’s 22 and now, surely, gifts the eight jersey to Jack Conan. Rating: 4

Irrelevant, as the starting XV gave them no chance of building a way back into this contest, but Seán Cronin’s lineout throwing is not going to solve the lineout malaise. Rating: 5