Leo Cullen and the making of a Leinster leader 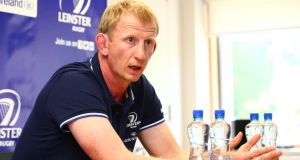 Undoubtedly fast-tracked, Leo Cullen as head coach doesn’t come as a surprise to those who have known him longest.

His formal appointment by Leinster this week can be traced back to 1995-96 when he and a few others practically player-coached Blackrock to back-to-back schools cups.

Cullen the leader has been in evidence at representative level since captaining the Ireland under-21s in 1998.

The 37-year-old has always been a student of the game. Or a slave to it. When others went on holidays, he was off furthering his rugby education. Before succeeding Jono Gibbes as forwards coach last season, he linked up with Michael Cheika’s New South Wales Waratahs for their pre-season and, being in Sydney, he also peered into the world of rugby league, in the form of the two most recent National Rugby League champions the Roosters and the Rabbitohs.

“That, I found, was a very beneficial trip because all the time you are cementing ideas in your own mind,” says Cullen. “Another trip I went on was to New Zealand, where I spent a bit of time with the Chiefs and the Crusaders – two really really good environments. All the while, you are trying to borrow ideas.”

The value of the Leicester Tigers model Cullen brought home in 2007, when the Leinster revolution truly began, is again comparable to the current promotion-from-within policy, and while it wasn’t the initial plan for either club, it has become the blueprint.

It has worked for Leicester with Richard Cockerill, Geordan Murphy and even Aaron Mauger, the former All Black, now returned to Welford Road as head coach, not unlike Kurt McQuilkin’s second coming in Dublin.

“I was emailing someone from Leicester actually this morning, who had sent me a message,” Cullen says. “I learned so much over there. It was a club that I had a lot of respect for since I was a kid watching Dean Richards and Martin Johnson and some great players they would have had over the years. I was close to going there when I was younger, so the what-if was always in my head, especially with Geordie Murphy, who I would have been very close with as well. He went there when he was 19 and I always looked and saw what they did. They won Europe in 2001 [and 2002] with a really, really good team.

“It’s a club that’s based on really good principles, and that’s why they have been successful over a long duration.”

With so many bodies on international duty, the Academy players are working in close proximity to the senior squad, so it’s manageable in the short term.

An appointment is expected after the World Cup.

Richie Murphy, skills and kicking coach, is also assisting Joe Schmidt’s World Cup preparations. The currently unemployed Carlos Spencer has been mentioned, along with Leo Crowley, whose brother Kieran is coach of Canada, who Ireland play on September 19th.

“Richie is contracted to Leinster until the end of the season so he’s very, very important,” says Cullen. “He’s taken part in some of the pre-season as well. We are reassessing all the time.

“I am happy with what we have in place currently. Kurt [McQuilkin] has signed on for two years. John Fogarty has come in as well. Fogs has been working with a lot of the young guys and the A team (as scrum coach). We have a good relationship. He’s going to help me out with the forwards as well.”

Fogarty’s relationship with his new boss dates back to the Ireland schools tour of Australia in 1996.

“Again, it’s something we are looking at. Kev epitomises what is great about this place,” says Cullen. “Jamie did a great job last year under Matt [O’Connor] in difficult circumstances.”

An even tougher road lies ahead. Should Ireland reach the semi-finals of the World Cup, then Leinster’s frontline players, at least 15 internationals, will only become available in the week leading up to the Champions Cup opening round against Wasps in Dublin on November 15th.

Cullen, as always, adopts a pragmatic attitude. “What happens, in terms of results, I can’t say that right now, but I am very optimistic about bringing some of these players through. If we don’t get the benefit of it in terms of results straight away, we will hopefully get the benefit of it from them in terms of experience and how they are going to contribute for the remainder of the season. Because if you have all those international players here in the system, maybe those guys don’t get the opportunity. I think it is really, really important that these players capture the chance that they have.”

At least everyone knows who’s in charge.