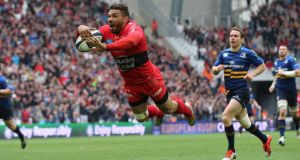 “Habana is always on the lookout for that sort of ball. He shoots out of the line a lot more than other wingers. Yes, Madigan took a risk with the pass but Habana took a big risk too.” Photo: Billy Stickland/Inpho

As the game went into extra-time on Sunday, it was like the old boxing matches that went 15 rounds. The fighters had given everything on both sides and now it was as much a matter of whose minds held up better rather than whose bodies could see the game out. Mental fatigue is a killer, especially in a tight game where the two sides have battled each other to a stalemate and a mistake can decide everything.

If you had offered Leinster a scenario beforehand where they would be playing in extra-time with Toulon down to 14 men because of a sin-binning, they would have bitten your arm off. But actually I think if you look at how it all worked out, the yellow card to Ali Williams cost them the game.

True, it took a weird set of circumstances for it to happen. I’d be fairly sure that against almost any other team in the competition, the extra man would have seen Leinster home. It very nearly did anyway because Ian Madigan’s pass came so close to finding its target and breaking the game open for Leinster.

But in the 15th round, anything can happen. It’s not about skill and ability at that point. It’s about keeping your head and doing the right thing at the right time. I would argue that Ian Madigan more or less did that. The only problem was that Bryan Habana did it too.

Everything has a context. That game on Sunday was poor in quality, a total dogfight. It was cup rugby where both sides were reluctant to take any risks. That’s what you have to remember first and foremost about where both sides’ heads were at in extra-time. They had spent the whole afternoon beating the living daylights out of each other and in the middle of the battle down on the pitch, the atmosphere would have been almost suffocating.

And then, all of a sudden, Leinster found themselves with an extra man for 10 minutes. At that point, you have to make a decision. Do you keep playing the way you have been for the whole afternoon? Do you keep it tight and do the basics and stick to the plan? Or do you feel that you have a responsibility now to go and press home your advantage?

To the rest of us sitting in the stand or watching on TV, the choice is obvious. You go for the kill. This is what you’ve been waiting for – a bit of space to open up so that you can break the deadlock. Go and win the game.

But it’s not so simple down on the pitch. For one thing, Leinster had already come extremely close to winning the game playing to the game plan. If Jimmy Gopperth’s drop-goal had gone one side of the post instead of the other in the 78th minute, Leinster would have pulled off a massive win. So even though Toulon had gone down to 14 men, it would have been difficult for Leinster just to automatically flick a switch.

Still, your natural instinct is to speed up, to put a bit more urgency into your play, to raise the tempo. It can mean that you just aren’t as careful as you had been over every pass or every clean-out. You want to get on with it, you want to reach out and grab this chance while it is there. There’s no doubt that can harm your accuracy.

So take a situation like Leinster had on Sunday. Williams is off but time is ticking away on Leinster’s advantage. There are five-and-a-half minutes left until Toulon are back to 15 men and they’ve already kicked a penalty to go 18-15 ahead. Getting outscored when you’re a man up is a no-no at the best of times but in extra-time of a European semi-final, you’re feeling like you have to go for it all the more now.

Seán O’Brien goes in and gets a turnover and suddenly there’s a chance. But because it’s a turnover, Leinster have to retreat and realign very quickly. That can be difficult – you’re going back to go forward and you have to do it quickly if you’re going to exploit the space.

Very often, a pass like that wouldn’t have harmed a side like Leinster. They’re one of the best teams in Europe so most of the time when they’re playing against a team that has gone down to 14 men, they’ve already got the upper hand anyway. When they’re playing inferior opposition, they can get away with a little less accuracy. They’re less likely to get caught out.

But on Sunday, they were playing a Toulon side made up of some of the best and most experienced rugby players in the world. A lesser team could go into its shell when playing 14 v 15 in extra-time but not these guys. Habana is always on the lookout for that sort of ball. He shoots out of the line a lot more than other wingers. Yes, Madigan took a risk with the pass but Habana took a big risk too.

It’s very unlikely that Madigan’s pass would have been picked off in a Pro12 game because very few wingers are as good at reading the play as Habana is. Leinster would have known that about him but maybe just at that split second, the situation made Madigan forget it. Or, more likely, the situation just demanded that he go for it regardless.

When the opposition go a man down, it’s not like you all look at each other and say, “Right, we’re going for it now”. It’s more that you feel an onus to make it count. There’s going to be space somewhere so you feel you have to move the ball around to find it. And those 10 minutes can slip by very quickly.

The key is focus. If you’re on the team that has gone down to 14, you know that you have to be hyper-focused. You can’t let your concentration slip, you can’t be slow up off the ground for a tackle, you have to be more switched on than at any other stage of the game.

I always found it helpful to remind myself that if I lost any small bit of focus in those 10 minutes, the team was effectively down to 13 men. That fairly concentrated the mind – assuming, of course, that it wasn’t me sitting in the bin!

Leinster didn’t do a lot wrong in those 10 minutes on Sunday, even though that spell was the losing of the game. They just came up against a team of enormous quality who punished one loose pass and took a soft try out of it.

They matched Toulon all day long but just when the squeeze came on, they found themselves playing against a team who didn’t see their sin-binning as the end of the world.

Go back and watch those 10 minutes. There was no panic from Toulon whatsoever. It was controlled and composed. This is what all the money pays for – guys who play the situation, who’ve played in high-pressure matches before, who’ve won World Cups. They knew that playing with a man extra put the onus on Leinster and they didn’t have to force anything themselves. Habana sniffed out his chance and killed the game stone dead.

Leinster put huge pride back in the jersey on Sunday. They went toe-to-toe with a team going for three-in-a-row and if their form over the course of the season had been at this level, nobody would have had a problem with them.

He got it 100 per cent right and Toulon are in the final. That’s how fine the margins are.