Leinster shake off Zebre in second half 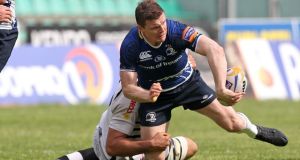 Zebre 22 Leinster 41: Leinster leap-frogged Glasgow into second place with a bonus-point victory over Zebre yesterday, putting them firmly in range of a home semi-final.

Tom Denton, Fergus McFadden, Fionn Carr, Dominic Ryan and Ica Nacewa were all amongst the try-scorers on a good day all round for Joe Schmidt's men, who also left Italy with a clean bill of health ahead of this week's Amlin Cup semi-final.

On his return to action following seven weeks on the sidelines, Jonathan Sexton got 65 minutes under his belt, kicking seven from seven in an eye-catching performance which earned him a glowing report from his coach.

Unsurprisingly, Schmidt would not say whether Sexton had done enough to start on Saturday against Biarritz.

He hinted that the six-day turn around may favour in-form deputy Ian Madigan, but nonetheless returned home to Dublin with plenty of food for thought.

"We would always back Johnny to make his kicks, but on top of that he got through a power of work, especially considering he hasn't played in so long," said Schmidt of his soon departing ace.

"It was great to have him back out there. He is a great general out on the field, and he gave us a fair bit of direction.

"We'll have our medicals tomorrow, and we'll see how guys have come through the game.

"In terms of next week, the six day turnaround would probably favour fresher players, but at the same time Jonathan is a marquee player for us, and played with great assurity today."

Indeed, Sexton was a driving force for Leinster, who didn't have it all their own way against a pumped-up Zebre side.

The Italians shifted this one from their normal ground in Parma to the neighbouring city of Reggio Emilia in a fund-raising exercise for those affected by last year's double-earthquake strike, and were suitably pumped up for the clash.

In the case of one dreadful tackle on Brian O'Driscoll from old friend Mauro Bergamasco, they were perhaps a little too pumped up.

On one level, Bergamasco's tackle was understandable, for O'Driscoll was outstanding right from the off, and caused the home side no end-of problems, in particular during a whirlwind opening.

Patient controlled build-up play read Leinster's early modus operandi, and they were rewarded with two tries inside the opening quarter of an hour.

The first, a simple run-in for Denton out wide after some neat footwork and good hands by Andrew Goodman.

Shortly after, McFadden was skirting home from roughly the same position after Sexton's killer pass saw him away.

The returning outhalf kicked both conversions as well as an earlier penalty, and one wondered whether the bonus point would come before half time.

However, the wheels began to buckle a little as the half wore on, and some desperately soft tackling saw Zebre tie up the scores before half time, Sinoti Sinoti and Daniel Halangahu both crossing for converted tries.

Whatever Schmidt said at half time seemed to have the desired effect, however, and Leinster had re-opened their ten-point lead within five minutes of the second half.

Sexton firstly slotted home a penalty before angling a cross-field kick which stood up nicely for Nacewa, who in turn fed Carr for try number three.

And they didn't have to wait too much longer for they the all-important fourth try scored by Ryan after a beautiful inside feed from Ruddock.

Nacewa added a fifth try from a quick tap penalty, and once again Sexton converted, his last action before leaving the fray.

Carlo Festuccia snuck home for a late Zebre try but by that stage Leinster were already concentrating on next week's task against Biarritz.

"It was a case of coming over, getting the points, and not picking up any injuries really," added Schmidt.

"We were good at times, sloppy at other times, and will definitely need to step it up a level next week.

"I don't think we'll get that latitude to play the way that we did today.

"There was a lot of time and space that guys had on the ball.

"That will all disappear against a really good defensive team like Biarritz. Having said that, we're really looking forward to the challenge."