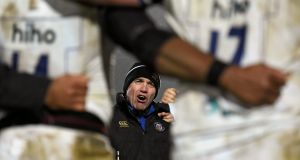 Mike Ford at the RDS last January where his side Bath lost to Leinster in the Champions Cup. Photograph: Stephen McCarthy/Sportsfile via Getty Images

Mike Ford is among several coaches to hold discussions with Leinster as the province looks for a defence coach to replace Kurt McQuilkin, who has decided to return to New Zealand.

“Kurt leaving will obviously leave a hole,” said head coach Leo Cullen just over two weeks before the Guinness Pro 12 season commences. “He has had to move on for family reasons. For us now it is an opportunity to add somebody really positive into the group.”

McQuilkin leaves before the season opener against Treviso on September 2nd, and Leinster have spread the net wide as they search for a replacement.

Both Andy Farrell and Graham Henry are out of the running. The idea of Farrell taking a short-term dual role with Leinster and Ireland is not feasible with Ireland facing an expanded November international series. The return of Henry on a more permanent basis, following the World Cup-winning All Black coach’s two-week visit earlier this month, is also a non-starter.

“I don’t see it happening,” said Leinster scrum coach John Fogarty. “He has got his own roles in New Zealand. His family is there.”

Ford would bring what this Leinster coaching group lacks: a wealth of experience. He has worked in Irish rugby before and the 50-year-old does need a job to resurrect a career that has stalled since Bath released him from the director of rugby position he had held since 2013.

Ford spent four seasons as Ireland defence coach from January 2002 and was on the coaching ticket of the British and Irish Lions tour of New Zealand in 2005.

He subsequently joined Saracens as skills coach but was promoted to head coach before returning to a specialist defensive role to help England reach the 2007 World Cup final.

After the unsuccessful 2011 tournament, he joined the Bath backroom before taking over as director of rugby in 2013. Bruce Craig, the English club’s millionaire owner, replaced Ford this summer with the highly regarded Canterbury Crusaders Todd Blackadder, who brought in Tabai Matson as head coach.

Matson revealed recently he had held discussions with Leinster about an unspecified coaching position.

Ford has other options in Japan or the United States but is thought to be keen, at least temporarily, to focus on the defensive expertise that prompted the IRFU to recruit him 14 years ago.

Cullen did not rule out backs coach Girvan Dempsey, Fogarty and himself sharing the defensive load on an interim basis. “We will have a plan in place if we don’t have one of those people in situ where we can move forward with the coaching staff that we have,” he said.

However, Fogarty intends to focus primarily on the scrum. “I’m quite clear in my role with what I have to do this year and I don’t see myself moving to defence.”

Dempsey agreed that his job could not be diluted if the Leinster attack were to return to expected standards. “I got to stay focused on what I am doing. My current remit is big so I don’t think you can add more to that. Kurt has been excellent and will be with us for the next few weeks. His systems are in place and he has added to them from last year. They are up and running. It is about keeping them going until we find a replacement.”

Dempsey recently returned from New Zealand where he spent time shadowing Tana Umaga at the Auckland Blues and Chiefs head coach Dave Rennie ahead of their 40-7 victory over Wales in June.

“Really excellent coach, very open,” was Dempsey’s opinion of Rennie, who will be coaching somewhere in Europe next season. “It was great to see him work. Massive in terms of culture, values, players understanding their surroundings, their organisation, their community. Very astute in how he sets a team up and how he sets his attack and defence up.”

The arrival of Ford would immediately counter the surprise loss of McQuilkin.

“I certainly don’t feel threatened,” said Cullen at the suggestion of Leinster hiring an experienced coach, even in a director of rugby capacity. “I loved having [Graham Henry] here.”

Cullen did confirm the head coaching job came at least three years sooner than he expected after Leinster struggled to find an experienced replacement for Matt O’Connor.

“It is very different to what I signed up for, for sure. But I am doing it now so no point in worrying about any of those other questions because I don’t have time to think about the answers.”