Leinster beaten but unbowed as Toulon show that power prevails 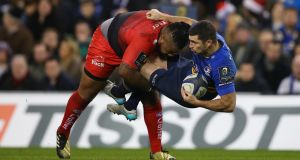 The other week Leinster had a bad time. Thrashed about on the French Riviera, a mere six days later they briefly morphed into enforcers.

Pity they were unable to sustain it. The tide had turned blood red by 64 minutes when Anthony Etrillard – one of Toulon’s heavy artillery launched off the bench – was powered over to make it 17-16 to the European champions.

By then Leinster were trapped in their own 22. A shame, considering how well they had started.

Devin Toner put Ma’a Nonu into the turf (the marvellous one didn’t flinch) and Jamie Heaslip jarred the ball from Matt Giteau’s grasp. Josh van der Flier was everywhere, while Luke Fitzgerald is the form player in Ireland.

The famed Toulon backrow of Juan Smith, Steffon Armitage and Duane Vermeulen were met and matched behind the gainline. Armitage wasn’t allowed squeeze himself between ball and turf.

This was a 40-minute performance bursting with pride, but in rugby power wins every time.

“At half-time we said Leinster weren’t dangerous,” shrugged Bernard Laporte afterwards about the 16-5 deficit that was addressed within 18 minutes.

The loss of Mike Ross to a “significant hamstring tear” on 24 minutes saw the scrum pendulum swing Toulon’s way.

Lots of these injuries to Irish forwards since the World Cup. Ross possibly joins Paul O’Connell and Iain Henderson on that long road to rehabilitation.

“It is intact at least,” said Leo Cullen.

There can be some hope gleaned from this performance. Points rarely come easy from the kings of Europe.

It took between the 13th and 18th minute before Wayne Barnes ran under the Toulon posts. The penalty try robbed van der Flier of his first European touchdown after he motored the driving maul.

Johnny Sexton converted and, with an early penalty banked, Leinster were 10 points clear on this balmy December night in Dublin.

Toulon struck next. It came from Barnes penalising Rob Kearney at a ruck and a few phases later Isa Nacewa rushed out of the line but failed to intercept Guilhem Guirado’s pass to the brilliant Smith.

On went Leinster. Rhys Ruddock, having a stormer under the gaze of the Ireland coaches, burst down field. The try was botched when a poor left-handed Fitzgerald pass was knocked on by Rob Kearney but Barnes went back for Guirado’s no-arms tackle on Jack McGrath. No sin bin though.

The 39th minute was as hectic as sport can get. It ended with Sexton sticking over another three points but not before the loss of Ben Te’o to concussion.

The for-sale centre banged the back of his ceann when trying to untangle several Toulon players from interfering with Sexton’s face and neck.

Leinster kept going with Fitzgerald gliding inside Nonu, before an easy penalty came when Delon Armitage petulantly put a shoulder into Eoin Reddan.

Te’o will always be a loss but at least the Fitzgerald-Ian Madigan centre partnership got another airing.

Laporte had had enough of scrumhalf Escande’s miscuing boot and mixed it up early in the second half with Tom Taylor taking the tee.

Of course, we know Toulon never bend. Not that they were themselves on this night. Drew Mitchell blew a certain try when dropping Taylor’s pass on 54 minutes but the scrum wars turned in Toulon’s favour, and the Wallaby winger appeared to atone for his earlier blunder with a try in the corner. Not so. Seán Cronin’s fine cover tackle put Mitchell into touch.

Then Cronin messed up the resulting lineout fling. That ensured a relentless assault on the try line with Barnes eventually running under the posts after two crushing scrums.

Next Anthony Etrillard was powered over thanks to the twisting direction of Juan Fernández Lobbe (what a sub to have). Mamuka Gorgodze also came in just as Sexton was forced ashore with a quad injury.

The bonus-point fourth try seemed a formality but strangely it never came. Taylor’s long-range penalty did provide some breathing space as the masters of winning denied Leinster’s late, and ultimately inaccurate, charge.

The pick of the sloppiness was Zane Kirchner’s no-look pass slipping through Nacewa’s hands and into touch.

Then Jordi Murphy was sin-binned as Gorgodze stretched over to send the crowd pouring down Lansdowne Road, quickly forgetting rugby as the bright lights beckoned. But no try! The Georgian beast fumbled the pill before his dive.

Limerick for redemption on December 27th.