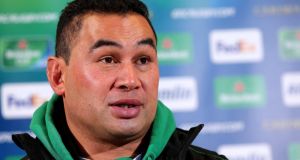 Pat Lam: “We all have a job to do and I will do mine to the best of my ability.” Photograph: James Crombie/Inpho

Connacht coach Pat Lam has refused to get involved in a war of words with Rob Penney after the Munster coach claimed that the signing this week of Mils Muliaina illustrated that the westerners have an unfair advantage in the transfer market.

Penney also questioned the value to Irish rugby of the former All Blacks full-back going to Connacht for a season, but Lam has refuted his claims.

Lam insists that the goalposts have not changed since he arrived last year and that he is determined to turn Connacht into a top six in the league and qualify for the Heineken Cup off their own back.

And he said he intends to do it without increasing the number of non-Irish qualified players at the Sportsground and without his budget being increased ‘even by a cent’ for next season.

“We all have a job to do and I will do mine to the best of my ability,” said Lam, who added he had no intention of getting into a war of words with another coach or anyone else.

“When I knew I was coming here over a year ago I read the IRFU strategic plan in full, what their vision was for rugby in Ireland and the role that Connacht had in it. They want four strong provinces, all competing and performing, and that is what I want for Connacht.”

He is making several changes to his squad for next season and the 33-year old World Cup winner is the latest major transfer coup by Lam, with centre Bundee Aki also coming from the Chiefs after signing a three-year deal, while hooker Tom McCartney will join from Lam’s former club Auckland Blues, also on a three-year contract.

But Lam says these are being funded by other players moving on this summer, while the number of non-Irish qualified players in the squad is not increasing.

“Part of my role is our recruitment, our retention and looking at the squad. So we did a lot of homework on this, this hasn’t just happened. And obviously I’ve got relationships particularly down in the southern hemisphere, in New Zealand.

“Once I know where we can make improvements on the squad, it’s really about getting down to key people and really selling the vision of Connacht and where it is because let’s face it, when I when was down there I knew about the other three provinces but not so much about Connacht.

“But where Connacht stands and the Irish Rugby Union they want four strong teams and there’s a lot of support there and I think doing your homework and doing the yards around that area has made a big difference for us so all we can do is control.

“And what I will say again is we haven’t gone one cent over the budget that we had last year. A lot of people think that more money has come in for us for players, it hasn’t, obviously players have been leaving and it has freed money up and our priority has gone to where we can strengthen our team.

“I know that there’s talk but we actually have one less non-Irish qualified player than we have this year as Bundee Aki, Mils Muliaina and Tom McCartney replace James So’oialo, Dan Parks and Nathan White, who’s now Irish qualified. It’s just swapping one for the other. There hasn’t been any special exception made for this year to the next year,” added Lam.