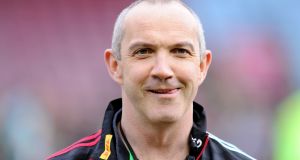 Harlequins director of rugby Conor O’Shea has announced he will leave the London club at the end of the current English Premiership season. Photograph: Clive Gee/PA

Conor O’Shea remains coy about where his rugby future lies but has not ruled out a move to coach Italy after recent talks with Italian officials.

The 45-year-old, who announced he was stepping down as director of rugby at Harlequins at the end of the season, has been linked to a move into the international arena for some months.

In December, French newspaper Midi Olympique published a story saying O’Shea and Italian officials had met twice to discuss the position, which will become vacant when incumbent Italy coach Jacques Brunel steps down at the end of the season.

It was a revelation that the Kerry native had confirmed but said he would be remaining with Harlequins. To further sweeten the deal, the French newspaper reported that former Irish outhalf Ronan O’Gara had also been sounded out about becoming part of O’Shea’s backroom team.

“I’m making this decision when I have a really close relationship with the (Harlequins) players. I wanted to tell them face to face and some of them one to one,” O’Shea told The Irish Times. “I wanted to be in control of this rather than someone else being in control.”

The French newspaper added that the former French scrumhalf and Montpellier coach Fabien Galthie was also part of the Italian trawl for a big name to head up their national team.

“Conor took over as director of rugby after a difficult period in our history. Under his leadership and through his determination, energy and positive approach, he has helped restore pride in our famous shirt and rejuvenate the playing style for which we are known,” Harlequins chief executive David Ellis said.

“His passion for the game, for the club and for the squad he has built is there for all to see.”

O’Shea, who is also an RTÉ rugby analyst, told Sky Sports that he had no shortage of opportunities. “I don’t know what the next move is – I’ll see. There’ll be plenty of opportunities. I’ll make that decision as and when, and it may be made for me in many ways. Whether it’s Italy or not will be for them to consider, not for me.”