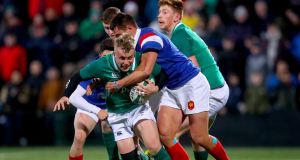 Ireland’s Craig Casey in action against France’s Arthur Vincent. “We will back ourselves against any team we come up against.” Photograph: Oisín Keniry/Inpho

Ireland Under-20 coach Noel McNamara affectionately refers to Craig Casey as ‘Le Petit General,’ a ubiquitous phrase coined to describe a succession of French number nines dating back to one of the original of the species, Jacques Fouroux, the 5ft 3in Auch scrumhalf who captained his country to a Six Nations Championship Grand Slam in 1977 and coached them to two others in 1981 and 1987.

Diminutive in stature, Fouroux adopted a hectoring tone as he directed a forward pack that contained some of the most fearsome French forwards of all time.

Casey may have an inch or so on Fouroux but he shares the Frenchman’s on-pitch philosophy, chivvying and cajoling those around him verbally whilst simultaneously offering a blur of perpetual motion.

The Irish Under-20s scrumhalf, currently in Argentina preparing for the World Junior Rugby Championship that begins next Tuesday, played in three of five matches during the successful Six Nations Grand Slam winning campaign – injury denied him on two other occasions – scoring a brace of tries.

There are a number of vignettes that stand out, testifying to his qualities, arguably the foremost of which was watching him lift the 115kg French number eight and world player of the year, Jordan Joseph, in a tackle and propelling him backwards at a rate of knots. Casey was light about 50 kilos in that collision.

But it would be remiss to dwell on his stature because it should in no way camouflage his talent. Quick and agile, he reads the game intelligently as befits the son of former Shannon backs’ coach and video analyst, Ger, who now works as a development officer with the Munster Branch. His rugby bloodline is further transfused by his uncle, the former Munster player and current Connacht Academy backs’ coach, Mossie Lawler.

The 20-year-old grew up wanting to play rugby for Munster, a mascot for the province when he was six, and then following a rugby pathway from Shannon minis to Ardscoil Rís, back to Shannon, into the Munster academy, all the while selected on various underage representative teams at provincial and national level. Then at the end of April he made a first appearance for Johann van Graan’s side; a four-minute cameo against Connacht at Thomond Park.

Conor Murray tweaked his neck with the last drill in the warm-up and Casey went from being 24th man to sitting on the bench. He recalled: “As soon as I saw him go down, I thought ‘this is my chance now to make my debut’. So, I just ran in with the team and I tried to instil as much confidence in them so that if I was called upon, they knew I was ready.

“It’s obviously something I’ve dreamed about since I was a young boy growing up around Munster. There weren’t that many family members there because I wasn’t actually on the bench. When I was called in, there was a rush to get to a TV screen.

“My grandmother actually heard I was warming up and she ran up the road and forced her way into Thomond Park. She actually only arrived for the last 10 minutes. My parents were there and I’d say my mother was probably the most nervous woman in the stadium but she had my father there to calm her down thankfully.”

It inspired memories of the day he ran out at Thomond Park as a six-year-old, the team mascot, holding the hand of the then Munster captain, the late Anthony Foley.

“It was class. I still remember running out with Axel and looking up at the players in the tunnel and thinking ‘Jeez, this is really happening’.

“I still have Peter Stringer’s jersey from that season as well at home. My uncle got it for me for my Communion. Look, it’s something I have dreamt about since that day, to put on a Munster jersey and luckily I have now.”

So, against that backdrop, a story linking him with Leinster recently seemed a little spurious not in the fact that the Pro14 champions would want him but that he’d countenance it. Munster responded swiftly to remove any conjecture by offering him a development contract next year with the promise of progressing to a senior one in the summer of 2020.

His immediate future is in Argentina where Ireland have been drawn in a pool with last year’s beaten finalists England, an Australia team that beat New Zealand 24-0 in the final of the Oceania U-20 Championship and Italy, who have finished eighth in the last two World Cups.

Ireland played a brace of warm-up matches against Leinster and Munster development teams as well as enjoying a number of training camps. They left for Buenos Aires via Amsterdam on Thursday, before undertaking a six-hour coach journey to Santa Fe.

Casey explained that the buzz of anticipation was there from the moment the squad reconvened. Winning the Grand Slam has been parked, other than drawing from the well of confidence it inspired. Injuries to a number of key players haven’t dented the morale. Their absence is acknowledged but the scrumhalf asserts that those that travelled in their stead earned the honour.

“We were happy with how we performed in the Six Nations, but I think there’s still a lot of improvement to do. If we want to win the World Cup, we’ve got to improve. Every other squad that’s going will improve from their games. I think we’ve such confidence in the way we play that we will get better and we’ll back ourselves to win it.”

Casey will be found at the epicentre of Ireland’s efforts, courageous and unyielding, and a player who puts his frame in harm’s way, particularly in diving on loose ball.

“Scraps are what we call it and there’s competition to see who gets the most scraps in a match.” The image of the cartoon character Scrappy-Doo springs to mind, although nobody will hold Casey back.

He concluded: “We really need a good start against England and they will be gunning for us like the first game in the Six Nations. It will be a hard test but I think if we win that game, which we will back ourselves to do, it will set us up nicely.”

“Australia had a very good win down in the Oceania Series against New Zealand and they won the tournament out. I think we will back ourselves against any team we come up against but we know it’s going to be tough. You have to beat the best to be the best.”

They’d like to repeat that feat for a second time this season.