Ireland’s World Cup ends at the hands of England

Centre Emily Scarratt inspired England to a decisive 40-7 win over Ireland in the World Cup Semi-Final, and a place in the women's rugby World Cup final for the sixth time. Video: Reuters 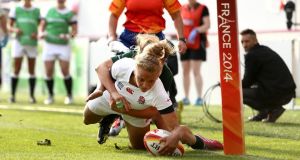 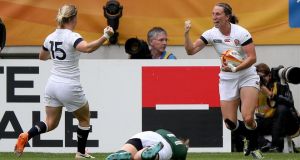 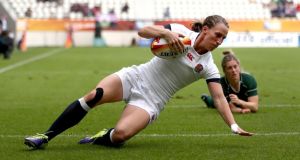 Despite a thrilling early try off the lineout maul, which was dubiously given to Tania Rosser after referee Amy Perrett asked the TMO “is there any reason I cannot award...” Ireland were ruthlessly denied any opportunity to roll out their gameplan.

“After 20 minutes we stood off them completely,” said frustrated coach Philip Doyle immediately afterwards. “Fringe defence, everything. Our tackles went high, lack of line speed, not coming up together and just negativity just came into the game. I think only twice we got over four phases.

“England, to their credit, were getting us at the breakdown. We were going off our feet too early. Our support player wasn’t there and the subsequent penalties had us back in our 22 again and again.”

It was like watching a really good Irish male team, circa the early 1990s (not that there was one), facing southern hemisphere opposition.

All the endeavour and attitude in the world isn’t going to halt the power surge.

“If we fronted up, like we did in the first 15 minutes, it wouldn’t have been that type of game,” Doyle lamented. “When we took our foot off the throttle we were gone. Maybe it was down to experience, our first semi-final of a World Cup. It’s a big stage.”

Can you sense that?

“They were nervous in the warm up but I’ve seen that before and they have performed.”

Not the IRB’s finest hour either. It’s never a good idea to announce the nominations for world player of the year a few hours before a World Cup semi-final. The peerless Emily Scarratt anyone? One woman scrum machine Rochelle Clark perhaps? Or even Maggie Alphonsi – she of 51 tackles in two Pool games – but instead the they went with two Canadians, the French number eight and Niamh Briggs.

Briggs, who owes the jersey nothing, had an evening to forget.

The hope of reaching a World Cup final disappeared from Ireland’s grasp in the 10 minutes leading up to half-time.

England, there can be no denying, belong in Sunday’s decider. Signs at scrum time had been ominous from the first put-in – as loosehead Clark did whatever she pleased - and that’s what ultimately turned the momentum back their way.

Then Scarratt was allowed stretch her legs.

The decision by England coach Gary Street to switch her from fullback to centre has brought a whole new dimension to their attack. Ireland could barely contain them or her. Not that it was down to lack of effort, it’s just the physical difference, the athleticism that told.

Thankfully Ashleigh Baxter refused to care about the size deficit.

On 32 minutes, Scarratt atoned for a rare miscued conversion of Clark’s try to edge England ahead 8-7. Briggs put the restart dead. An England scrum on halfway was the worst possible scenario for the Ireland pack at that moment.

“Briggsy, with a penalty missing touch and kicking it dead from a restart, that’s just not her,” said Doyle. “But when the others see her doing that their heads do drop.”

It eventually led to Scarratt finding space in the outside centre channel, where she glided away from Nora Stapleton, brushed aside the terrier tackle of Rosser and was all set for the touch down until Baxter came from nowhere to haul her to ground.

No matter. Alphonsi, the relentless English flanker, almost made the line and the quick recycle meant they could go directly at their favourite link in the Irish chain. They had been torpedoing Katherine Merchant at Ali Miller from the opening play.

The Laois lady knew what was coming; judo chopping the big fend before grabbing on for dear life. It worked about fifty percent of the time. It didn’t work that time.

Scarratt nailed the touchline conversion and England were free.

Instead of Ireland going into the changing room 10-15 in arrears it became 7-18 when Briggs wellied an attacking penalty at Danielle Waterman instead of the touchline. England once again showed their ability to make 50, 60 metre turnarounds in a couple of phases.

Some really intelligent play followed. With the ball poised to come Rachel Burford’s way from an attacking ruck, the centre turned and quickly called a move. Scarratt took off, expertly changing her line of running at the last second to glide inside Grace Davitt before brushing off Stapleton.

They really had done their homework.

She was stopped but Scarratt tagged on the three points.

Maybe the IRB will see the folly of their error and put her on a new, longer shortlist.

Scarratt effectively killed the contest with a penalty six minutes into the second half. Burford broke the line before finding her midfield partner but Lynne Cantwell made a great tackle before coughing up the penalty while trying to pilfer the ball.

Cantwell was eventually forced off with concussion when she tried to tackle Scarratt. Hopefully that’s not the last we see of the 32 year old in a green jersey. She won’t play on Sunday.

Doyle’s plan was to up the ante by sending Jenny Murphy and Siobhán Fleming into battle but it was too late.

Kay Wilson’s try in the left corner required the TMO but it finished with the giant Marlie Packer rumbling off the bench and over for two tries.