Centre’s return could be key as North wins cap 100; one day at a time for Dave Kilcoyne 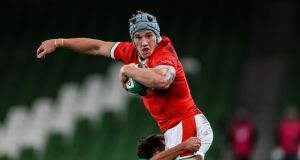 Jonathan Davies back for Wales

The spotlight will be on George North on Saturday, as he leads Wales out against England ahead of his 100th Welsh cap.

But it is the presence of his returning midfield partner Jonathan Davies which will offer Wales supporters plenty of reassurance in Cardiff.

Were it not for a number of serious injuries Davies would be a Welsh centurion himself by now - and there’s no surprise Wayne Pivac’s slow start as head coach last year coincided with the 32-year-old undergoing knee surgery.

Davies featured last autumn before missing the opening two rounds of this year’s Six Nations - and now he comes back into a side who are two from two and chasing a Grand Slam.

The Lions star has long been the the glue in this Welsh backline, and while he has a lack of minutes under his belt Pivac has backed him to make an impact in his new number 12 role.

2001 - Year of birth of 19-year-old England forward George Martin, who could make his debut off the bench against Wales.

“The Argies are a bit like them, they’re able to get their emotional energy to that level and when your mindset is at that, you’re always a dangerous team.” - Dave Kiloyne on the ‘emotional’ Italians.

Kilcoyne taking one day at a time

Often the bridesmaid, eight of Dave Kilcoyne’s 40 Ireland caps have come from the bench, with his only previous Six Nations start coming against Italy in 2019.

The 32-year-old Munster prop has struggled with injuries recently - an ankle problem kept him out for four months - but he his back in the starting XV for Saturday’s trip to Rome.

And earlier this week Kilcoyne insisted he is refusing to look any further ahead than the next game, with the 2023 Rugby World Cup starting to loom for some of Ireland’s more seasoned campaigners.

“You know, you’ve got to concentrate on training today, we have plays for the weekend that we have to try and use to upset this Italy team,” he said.

“That’s for us and if a player isn’t dialled in and focused on his training that day and on how he’s going to improve, I’ll make the mistakes that I made yesterday that I needed to remedy for today.

“And if you don’t remedy them then you get them wrong at the weekend and then there is no next week, there is no World Cup.”

Kilcoyne’s day-at-a-time approach has been enough to earn him a first Ireland start since Russia in the 2019 World Cup - he now needs to seize his chance in the Colosseum.

He still has a lot of catching up to do if he wants to overtake Shane Williams at the top of the Welsh scoring charts - he is currently on 42, with Williams leading the way on 58.

Williams turns 44-years-old today and during his playing days the spritely five foot seven winger was the antithesis of his team mate North physically - although both shared the same lethal eye for the whitewash.

And Williams has backed North to eventually usurp his record: “He’s still very young, he could potentially play for four or five years, he said. “Hopefully wanting to beat my record and be the top try-scorer for Wales will keep him hungry and keep him fit and he’ll have the desire there right to the end.”

Fail to beat Ireland on Saturday and Italy’s winless run in the Six Nations will extend to 30 matches - February 28th 2015 seems like a long, long time ago.

Almost six years to the day since that 22-19 win at Murrayfield there will be no survivors left in the Azzurri squad as they meet Andy Farrell’s side in Rome.

Italian stalwarts such as Sergio Parisse have slowly drifted away from the international game, with a cast of youthful hopefuls now in their place.

Franco Smith has named an unchanged squad from the one which was beaten at Twickenham for Saturday’s match.

Many of his players, such as Paulo Garbisi and Stephen Varney, are at the start of their careers. Beat Ireland and they will be remembered forever.