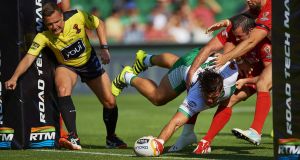 Ireland coach Mark Aston called on Rugby League World Cup organisers to take a look at the format after his side bowed out despite winning two of their three group matches.

The Irish, who were 34-6 winners over Wales in Perth on Sunday, have been one of the successes of the tournament but lost out on qualification for the knock-out stages to Papua New Guinea.

Aston pointed to the contrast provided by Samoa, who are in the quarter-finals despite gaining only a draw from their three games because three teams go through from their group.

“It’s disappointing and something that probably needs looking at,” Aston said. “We deserve to go through, I would suggest.”

Ireland captain Liam Finn was even more critical, claiming the format lacks logic and could hamper the drive to attract new supporters to the game.

“It doesn’t make sense,” Finn said. “Try and explain that to someone who’s not in rugby league – that’s how you judge it. I’ll go home and tell someone we won two games and didn’t get through and another team got through from drawing one.

“How do you attract new fans when that’s how you explain the game to them?”

Aston revealed afterwards that the game brought the career of former St Helens, Hull and Hull KR fullback or winger Shannon McDonnell to an end.

Wales were left still looking for a first World Cup win since 2000 but their performances have come as little surprise after a spate of withdrawals left them with just three Super League players.

Finn said: “We don’t take any satisfaction from beating Wales by a decent score.

“They’ve been let down by a number of players who pulled out late and I really feel for John Kear and all the staff.

“There is a gulf because certain clubs don’t release their players from Super League. I don’t think it’s good enough, especially by the players who have got a leg up from the Welsh game.”

Kear said: “Liam is a very gracious person. Obviously we’re disappointed that we didn’t have a stronger squad.

“It is what it is. We’ve attempted to do the best with what we’ve got. Whether we’ve succeeded or not, I don’t know, but we’ve tried.

“Rather than get involved in a slanging match with people that aren’t here, I’d rather focus on what’s happened. The players have represented their country as best they possibly can. They’ve worked extremely hard and been respectful of the opposition.”

The match also marked the final appearance of Wales’ veteran forward Phil Joseph, who hung up his boots after a 12-year career.

“I’m a bit emotional about finishing,” he said. “It’s a fantastic experience to be able to finish on such a stage.”