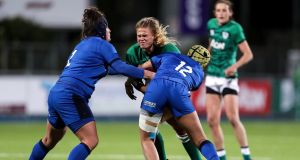 The final match of the women’s Six Nations between Ireland and France at Donnybrook on Sunday has been called off due to an outbreak of Covid-19 in the French squad.

Several members of coach Annick Hayraud’s backroom, as reported by the Telegraph, and some players have tested positive for the virus, The Irish Times has confirmed.

The match, originally scheduled to be played in Lille, was switched to Dublin when the IRFU made it clear, due to the Irish Government’s Covid protocols, that amateur players would have to quarantine for 14 days on their return. Some members of the Irish squad work in healthcare and teaching so that was not possible.

“Our Irish friends could not be exempted from the fortnight to come and play in France so we decided to go play next week in Dublin,” Hayraud last week.

It has yet to be decided to abandon the match entirely, and not finish the 2020 championship (England have already won the title), or find yet another slot in the calendar. Ireland are due to play three World Cup qualifiers in December but neither venues nor dates for those games have been announced.

Ireland lost two players, Eimear Considine and Laura Feely, before last week’s victory over Italy after “inconclusive outcomes” from testing. No positive tests were subsequently returned by Irish players but a cluster in the French camp has forced this match to be cancelled.

The men’s game in Paris on Saturday night is expected to go ahead despite concerns about France going into a full lockdown on Friday after 33,000 new cases were announced. The current understanding is that elite professional sport, like in Ireland, is exempt as both teams are in bio-bubbles.