Wayne Barnes v Ireland: Should Joe Schmidt’s side be concerned?

English referee has presided over 10 Irish defeats and just five wins - do numbers tell a story? 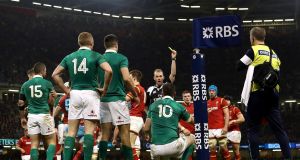 When it was confirmed that Wayne Barnes was refereeing Saturday’s stand-out match of the November window between Ireland and New Zealand at the Aviva, many Irish supporters digested the news with a distinct gulp. They would have been entitled too as well, but less so in latter times.

The same would probably have been true of the Irish management and players, and, indeed, many New Zealanders remain less than enamoured with the English official ever since he oversaw France’s 20-18 World Cup quarter-final win over the All Blacks in Cardiff in 2007.

In the 10 Irish games Barnes refereed before Schmidt assumed the reins, Ireland won two and lost eight. Even the two wins did little to endear him to Irish supporters, players or management.

The first time they encountered him, like the All Blacks, was at the 2007 World Cup, when he presided over Ireland’s decidedly nerve-wracking 14-10 pool win in Bordeaux.

Similarly, when he refereed Ireland’s Grand Slam finale against Wales in Cardiff in 2009, Barnes’s performance would assuredly have come under greater scrutiny had Stephen Jones’ last-minute penalty not fallen fractionally short and denied Ireland their 17-15 win. Ireland scored two tries to nil that day, but the 15-5 penalty count in Wales’ favour very much kept them in the game.

Following that game Ireland lost seven in a row when refereed by Barnes. This included the one Ireland-New Zealand game he oversaw, in New Plymouth in June 2010, when he red-carded Jamie Heaslip in the 16th minute for illegal use of his knee at a ruck on Richie McCaw close to the All Blacks line.

It was his first game in New Zealand since that infamous 2007 World Cup quarter-final in Cardiff, and he also yellow-carded Ronan O’Gara in the home side’s 66-28 win.

Wales beat Ireland at the Aviva in the 2012 Six Nations by 23-21 courtesy of a late penalty by Leigh Halfpenny after Barnes penalised and yellow-carded Stephen Ferris for a high tackle on Ian Evans. A disciplinary panel subsequently cleared Ferris of a dangerous tackle.

The seven-match losing streak culminated in Ireland’s first ever Six Nations defeat to Italy in Rome in 2013, when Barnes yellow-carded Brian O’Driscoll, Conor Murray and Donnacha Ryan, as well as Sergio Parisse.

However, Schmidt’s huge emphasis on improving Ireland’s discipline has seemingly worked, certainly when Barnes has been referee, beginning with a first and only win in five Ireland-Wales games with Barnes in charge, the 26-3 win in the 2014 Six Nations.

After a home win over France in which Barnes was referee, there were a couple of defeats in Cardiff when he was the man in the middle, and then a 28-8 win over Scotland last year in Dublin.

Perhaps most significantly, the average number of penalties per game against Ireland in the 10 matches Barnes refereed before 2014 was 10.3 per game, but in the last five games that has dropped to 8.8.

Yet Johnny Sexton, who was yellow-carded for a breakdown offence in the 2017 defeat to Wales in Cardiff and was captain when Barnes gave an erratic display in Toulouse’s win over Leinster last month, said last Monday: “We pride ourselves on our discipline. We have come on the wrong side of Wayne Barnes in the past so it is something we are going to have to look at even more so this week.”

Barnes’ performance when France beat New Zealand in that 2007 quarter-final drew the wrath of New Zealand for years, notably for allowing a forward pass in the build-up to France’s second try, with both Graham Henry and Richie McCaw subsequently criticising his performance.

The former noted that the All Blacks did not merit a penalty in the last hour of the game, while McCaw blamed the tournament organisers for appointing such an inexperienced referee at the time.

Beginning with that 2012 win over Ireland in New Plymouth, in the last dozen All Blacks’ games Barnes has refereed they have won eight and lost four, three times to Australia and once to South Africa.

Even so, both head coaches on Thursday praised Barnes, a qualified barrister who will retire from refereeing after next year’s World Cup.

Jaco Peyper was the referee when the ultra-physical All Blacks gained revenge over Ireland (for the defeat in Chicago) two years ago in Dublin, and while Schmidt stressed he had “no complaints” over the result, he commented: “We’d had a few guys who did get knocked about in that game. If it is spikey, that’s something that Barnesy is well able to cope with. He is one of most experienced refs in international rugby. He is the ideal man to sort it out if something needs to be sorted out.

“I don’t predict there will be something that needs to be sorted out. The All Blacks want to play positively, they do play positively. I don’t think they give up too many cards of any colour, and we like to think the same.”

Asked about the refereeing at the breakdown, Steve Hansen said: “Our discipline around the breakdown has been pretty good of late, and it’s pretty clear what Barnsey wants. If you deliver what he wants you should be okay. They talked at their conference about space being important to the game, and it’s something I agree with. Stay onside and you’ll reap the reward.”

Bríd Stack released from hospital with no spinal damage

Time decided football was finally over for Brees. Not for Tom 12:53
Phil Neville to step down as England head coach with immediate effect 12:23
Chiefs survive loss of Mahomes as Brady wins battle of the veterans 12:04
Bríd Stack released from hospital with no spinal damage 11:46
The Offload: Ronan O’Gara more than willing to take a punt on Jack Crowley 10:00
Crossword Get access to over 6,000 interactive crosswords