Warren Gatland well aware of what South Africa will bring 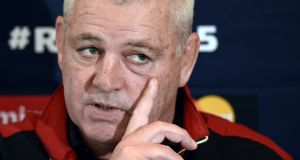 Warren Gatland was at his world weary best at the Wales team base in Weybridge, barely glancing up as he summed up the opposition.

“It will be the same old, same old from South Africa, ” said the Welsh coach, at once pointing to the Springbok strengths and a possible weakness – their one dimensional game.

Both he and his South African counterpart, Heyneke Meyer agreed that colliding bodies will play a significant role. They will use big ball carriers for gain line impact, with George North coming in off his Welsh wing to dig out, the breakdown brawl won’t be for the faint hearted and the scrum, lineout and driving mauls will be fiercely contested. Same old, same old.

Gatland being Gatland, wily, foxy and cunning knows how to play that game with Wales being the heaviest team in the tournament. But neither coach is likely to declare how they are going to play unless they have something else to bring.

There have been a few feints and disguised passes thrown this week in both camps.

But Gatland said something more interesting and suggested Wales will at least vary how they go about business in Twickenham.

“At this level and at this stage, you have to be prepared to throw in something different,” he said. “It is high risk, high reward. We are not ready to go home yet.”

While Meyer has to contend with his two locks, outhalf and centres being all under 24-years-old, Tyler Morgan’s previous two caps makes the 20-year-old a little green in Wales centre alongside Jamie Roberts with Springboks Jesse Kriel and Damian de Allande probably liking that alignment.

In Morgan’s appointment there’s also a touch of irony. Not long ago as a kid he had a poster of James Hook on his wall, the player he squeezed out of the 13 jersey.

Dan Lydiate is also recalled and will play with a metal plate in his face after taking a blow against Fiji, while the gnarled Gethin Jenkins is brought in, both of them for the anticipated high level of physicality.

The Welsh backrow is also back to normal after the gamble against Australia with Justin Tipuric at number eight, Sam Warburton at openside and Lydiate at six.

Gatland will also have looked at the stats and seen that South Africa have been giving away penalties. With Dan Biggar now the best kicker in the competition after landing 15 from 16 for a 93.8 per cent return, Meyer should be concerned. Anything over 80 per cent is regarded as acceptable for kickers.

“I said to the players this week we are right back where we started,” said Meyer. “We got to go through. Be very proud as South Africans. Don’t take anything away from Wales it is also their national sport and they are also a proud nation.

“But we have to get through this one. We like it when people right us down. We like to put pressure on ourselves.”

Habana is also chasing a Rugby World Cup record – he is the joint highest try scorer in tournament history, alongside Jonah Lomu with 15. Du Preez, however, has risen to his role, perhaps more than any other player.

“This year he wasn’t sure about playing but I begged him to play because I know he’s the type of guy if you have him in your team and he clicks, he’s like a Richie McCaw for the All Blacks,” said Meyer.

“Right up to when we left South Africa he wasn’t sure if he would come because he had trouble with his back. But he’s a worrier...he’s a genius, an unbelievable player. The bigger the pressure the bigger the heart.”

Big could be the theme for the day. Big collisions, big pressure and a big reward.

1 My sporting disappointment: Jimmy White and the elusive World Championship
2 Rory McIlroy: Maybe I’m just not as good as I used to be
3 The Offload: Joe Schmidt the influencer is due a second act
4 Ken Early: PSG would be sensible final move for Ronaldo
5 World Rugby push back on extending residency rule
Real news has value SUBSCRIBE

Liverpool sign left-back Kostas Tsimikas from Olympiacos 21:03
O’Sullivan up against it as Williams takes early lead 20:41
GAA permits clubs in Kildare, Laois and Offaly to reopen 19:35
World Rugby push back on extending residency rule 20:34
US PGA glory rests easy on Morikawa’s young shoulders 16:52
Crossword Get access to over 6,000 interactive crosswords