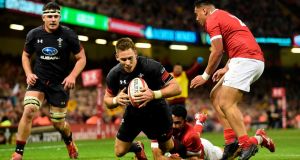 Liam Williams will replace fullback Leigh Halfpenny in the Wales team for Saturday’s autumn international against South Africa in Cardiff.

Halfpenny misses the Springboks clash due to the concussion he suffered during Wales’ 9-6 victory over Australia 12 days ago.

Williams has been handed the number 15 shirt by head coach Warren Gatland in a solitary change from the side that beat Australia.

Halfpenny went off near the end of the Australia game after being clattered by a challenge from Wallabies centre Samu Kerevi, who escaped sanction.

Williams, who lined up on the wing and scored two tries when Wales beat Tonga 74-24 last weekend, started twice at fullback for his country last season and in all three 2017 British and Irish Lions Tests against New Zealand.

Williams is the only starting XV survivor from the Tonga encounter.

Elsewhere, wing George North has recovered from a leg injury that forced him off against the Wallabies and Gatland retains a backrow of Dan Lydiate, Justin Tipuric and Ross Moriarty.

Wales have won four of the last five games against South Africa and they are also chasing a ninth successive victory against all opponents, which would equal their longest unbeaten run since 1999.

And they go into the Principality Stadium clash needing victory to complete a first four-from-four autumn Tests clean sweep after seeing off Scotland, Australia and Tonga earlier this month.

Reflecting on his selection, Gatland said: “We have rewarded the team that faced Australia with another start this weekend.

“Leigh misses out with concussion, but it’s a great opportunity for Liam at fullback.

“We are really pleased with how the bench has gone in the first three games, so we will be looking for that impact again on Saturday.

“There were a lot of tough selection calls, but that is what we want. The team that played last week was hugely impressive, and there are some disappointed boys who miss out.

“We want to end the campaign with a big performance against a very good South African side.”

The former Munster coach has named an unchanged team from the one that beat Scotland last weekend to face a Wales side undefeated since February.

“We have had a look at 50 players this year, and it is nice to have continuity, but it does not mean at all that these boys are the ones fixed to go to the World Cup,” he said.

“Having continuity against a team that has won eight games on the trot will help a lot.”

South Africa have lost four of their last five games against Wales, including a narrow reversal in Washington earlier this year.

But the Springboks have been in solid form on their European tour, beating France and Scotland after losing to England by a point in controversial fashion.

“It [victory on Saturday] would definitely make the tour successful, or relatively at least, because we would have liked to have won four out of four,” he added.

“We know how tough it is going to be. We have not beaten them in the last three games, and they have won eight on the trot.

“Beating a team like that will give us more confidence. If we beat them on Saturday it will mean we have won five of our last seven games, and lost two by one point and two points.”