New Zealand coach explains his selection for quarter-final against Ireland 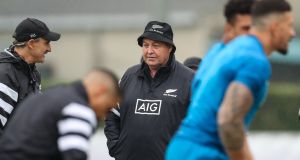 It wasn’t always thus but no head coach is more relaxed in such surroundings than Steve Hansen, and so it was in front of a forest of microphones, 60-plus journalists and 14 cameraman, at the squad’s hotel base in Tokyo yesterday.

Asked what the All Blacks will need to be on guard for given the appointment of Nigel Owens as the referee, Hansen said: “Watch out for his sense of humour. He’s pretty good with the one-liners.”

Not since Wayne Barnes was made the scapegoat by some in New Zealand has the appointment of a referee bothered the All Blacks and in Owens’s case, with good reason bearing in mind they have won their last 18 Tests in a row with the Welshman in charge.

“I think you’re focusing on the wrong things if you’re worrying about the referee,” Hansen added. “He has his idiosyncrasies. We know about them, Ireland know them but what I like about Nigel is that he has shown over the years that he is good under pressure. It will be a big pressure game and we’re happy we have got him for this occasion. We will adapt and adjust as we go.”

One of the more unnerving aspects of the All Blacks is that if their starting XV doesn’t get you, then the 23 usually will.

Much has been made of the world-class Brodie Retallick returning to the starting line-up after just 30 minutes of rugby against Namibia two weeks ago since dislocating his shoulder in the 16-all draw with South Africa in Wellington.

But they have the security of Scott Barrett as back-up.

“He can play 80 if that’s what we want but it’ll be unlikely,” said Hansen of Retallick. “Brodie is a bit of a freak when it comes to fitness. He’s got a big motor. His ability after long or short breaks, he has put the work in. There’s no question mark about that. It’s all about how long we have to, or want to play him.

“We are very fortunate that we have got Scott Barrett, who is a very good player in his own right, so we have the ability to inject some fresh legs into the game. Those fresh legs could be the difference makers. We are very fortunate with our bench. It’s strong and has been for a long time. When you look at that experience on the bench it does give you a bit of confidence,” said Hansen of eight players who have 297 caps between them.

The injury troubled Ryan Crotty, scorer of the match-winning try in overtime against Ireland in 2013, is one of several quality players to miss out on the 23, as does Ben Smith.

The All Blacks think-tank have opted for the in-form Anton Lienert-Brown and the relatively raw Jack Goodhue in midfield, only the third time they’ve played together, and Sonny Bill Williams on that experienced and potentially explosive bench.

“Like every team you pick, you look at the opposition and what you’re after and the midfield was no different,” said Hansen. “In this case Ryan has missed out. For this game we felt the combination of Jack, LB and Sonny was the one for us.”

Similarly, they could have gone either way with Codie Taylor and Dane Coles at hooker.

Hansen’s most interesting revelation concerned one of the reasons for their choice of Jordie Barrett over Ben Smith to cover the back three.

“Bender [Smith] has been playing pretty well too since that Canadian game as well. Jordie’s extra string is that he’s a big goal kicker and can kick goals from inside his own half or kick drop goals from halfway at the drop of a hat and those are things you have to take into account when you are picking a team.”

This suggests even the All Blacks believe the game could be decided by a late three-pointer.

Passing the initial goal-kicking duties to Richie Mo’unga has proved a success, and the outhalf was also in front of the media throng, flanked by fellow Crusaders backs Sevu Reece and Goodhue – all of them sporting moustaches.

For the last two Super Rugby-winning campaigns, their backs coach was Ronan O’Gara, and a smiling Mo’unga said: “Rog has been awesome. He’s very determined like all other Irish are, very driven, and that gives me a little insight into what Irish are like. So I know this week is going to be a very tough test and they’re going to come guns blazing.”

Reece’s electric and prolific form for the Crusaders helped propel him into this World Cup as the All Blacks’ bolter. If someone had told him at the start of the year he’d be playing in a World Cup quarter-final Reece smiled and reckons he would have said: ‘Wake up, you’re dreaming’.

“I still can’t even find the words to describe the feeling so it’s difficult to explain that, but it’s here now so just soak it up.”

Reece was set to join Connacht until the Irish province pulled out of the deal after the winger was cleared of a conviction after a court case for a domestic violence incident.

Reminded how things might have worked out differently, and asked if qualifying for Ireland through residency had been discussed, he was not of a mind to reflect on that about-turn.

Leaning forward and looking downwards, Reece slowly said: “That’s a tough question to answer. Like I said before, I’m here now so I can’t dwell too much on the ‘what ifs’. For me, it’s moving forward and just preparing myself really well to give the best come Saturday.”