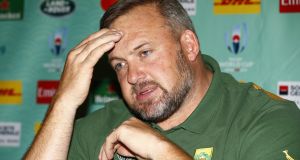 Matt Proudfoot, South Africa’s forwards coach: “If you have watched how we have played in the World Cup you can see how we will play on Sunday.” Photograph: Steve Haag/Gallo Images

South Africa are exasperated that, before their quarter-final on Sunday, the questions they are asked are invariably about their rivals and tournament hosts Japan, not the team rated New Zealand’s closest challengers for the trophy.

An article on their union’s website complained that “almost no questions” had been asked about the Springboks at their media conferences.

“Japan, Japan, Japan has been the focus of attention. Expect more of the same tomorrow.”

“They are a tier one country and we are tier two,” said one official when asked why half the reporters in the room at Japan’s hotel were not provided with a translation. The implication was that it came down to money – New Zealand and Australia have also provided an interpreter here – but South Africa are not a team to arm with a grievance.

“If you have watched how we have played in the World Cup you can see how we will play on Sunday,” said Matt Proudfoot, South Africa’s forwards coach.

“If you think it is going to be one-dimensional, then you have not noticed our evolution.”

When questioned about Brighton in 2015, attention is deflected to last month in Kamagaya, where the Springboks won a warm-up game 41-7 against a team containing 11 of the starters who beat Scotland last Sunday.

“We know that most people want Japan to win,” Proudfoot said. “A passionate crowd will be against us, but it will be no different to playing in New Zealand or at Twickenham. I am already getting goosebumps thinking about it, not how the rest of the world wants us to get beaten.”

South Africa will be able to call on their wing Cheslin Kolbe after his recovery from an ankle injury. The Toulouse wing is confident his side will not be distracted by all the talk of 2015.

“If you look at the current World Cup and compare it back to 2015, the rugby has definitely gone a different way,” he said. “It’s not the same style of rugby being played. But knowing we had the loss to Japan in 2015, I wouldn’t say that’s stuck in our head. We know that it happened but this is four years later.”

The crackdown on high tackles will benefit Japan because as defenders go lower, there will be greater opportunity for offloads and width.

“We know we will need to outwit South Africa,” said Uwe Helu. “They are a physical team and we have to be smarter in how we attack. We know where the space is, how to identify defenders and exploit them. They are different to other teams in that they work as a group when they attack, coming at you in twos and threes. We will keep tackling and come at them every time.”

Every Japan player at this tournament has said the same thing: we trust our leaders and the game plan.

“We have been very strictly coached in training,” said hooker Atsushi Sakate. Our reactions and decisions are very closely supervised.”

Which poses the question: can they think on their feet? South Africa intend to find out.