Tania Rosser back for Ireland Women after ending four-year retirement

TG4 to broadcast all Irish World Cup matches in France 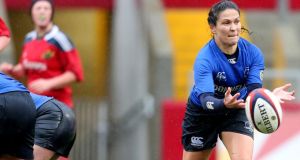 Tania Rosser is a surprise yet invigorating addition to Ireland’s World Cup squad ahead of next month’s tournament in Marcoussis, just outside Paris.

Now 35, the New Zealand born halfback should reach the half century of appearances for her adopted country as she will provide cover for Larissa Muldoon and outhalf Nora Stapleton.

“Tania is fitter than ever and in the best form of her career,” said Ireland backs coach Greg McWilliams.

Following three weekends in their Enfield camp, Ireland travel to Madrid to face Spain on Saturday before a final warm-up against Wales in Malahide.

Joe Schmidt and Les Kiss will be taking sessions in the lead up to the opening Pool match against the USA on Friday, August 1st.

World champions New Zealand are up the following Tuesday with Kazakhstan on August 9th. TG4 will broadcast every Ireland game live with Sky Sports also showing the Blacks Ferns tie.