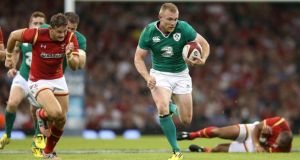 Keith Earls breaks with the ball to score an Ireland try during the international match against Wales at the Millennium Stadium on Saturday. Photograph: David Rogers/Getty Images.

The slickness of this performance was testimony to the coaching skills of Joe Schmidt and his staff, and the trademark level of preparedness on the training ground was such that Ireland were able to hit the ground running. And so, for the sixth “window” of his time as Irish coach, Ireland kicked off with a win.

For sure, this game will have helped the two coaching tickets toward finalising their respective 31-man squads for the World Cup but, beyond that, how much relevance it will have come the return meeting in three weeks’ time, much less the World Cup itself, is a moot point. If, as expected, all the front-liners from the squads return for that game, it will be an altogether more full-on affair.

Ireland had a stronger selection, with 418 caps as against 326 in a comparatively more makeshift Welsh selection featuring four debutants. As Schmidt pointed out, Ireland started with three of last season’s regular Six Nations’ pack – two more than Wales – and there was still plenty of experience in the back-line in the likes of Eoin Reddan, Keith Earls and Andrew Trimble.

Wales still have the core of the side that came within a whisker of reaching the World Cup final four years ago and, like Ireland, have won three of the last eight Six Nations. But digging deeper into their reserves, the stark evidence here is that Ireland have greater strength in depth.

Even so, this was a remarkably slick Irish performance, beginning with the solidity of the set-pieces and the potency of the Irish maul.

Fittingly on the day Mike Ross won his 50th cap, just over six years after making his debut at the age of 29, the scrum established an early supremacy which helped to lay on Darren Cave’s try on a virtual plate – helped by Mike Phillips showing him the inside.

The way Donncha Ryan and Richardt Strauss ran the lineout will have done their cause no harm, and Ryan also weighed in with 17 tackles, although the entire pack contributed, right down to Jack McGrath making lifts for Jordi Murphy to pull off one impressive steal when Wales went to the corner.

There wasn’t one blemish out of 15 Irish set-pieces whereas Wales were turned over once at scrum time and lost three lineouts.

Leading his country on the day he became Ireland’s most capped backrower, Jamie Heaslip oozed class and looked the best player on the pitch, while Jordi Murphy was good and the unfortunate Tommy O’Donnell simply immense – turnovers, carries and tackles. He looked fit, strong and quick until that fateful 75th minute.

Eoin Reddan looked as sharp as a tack at the base, quick to the breakdown, ensuring a high tempo, switching and varying the point of attack, sniping and box-kicking to good effect.

Paddy Jackson attacked the gain line well, although was culpable for kicking the ball away three times in good attacking positions and missed an initial sitter – although he recovered well.

Darren Cave ran some strong lines against a soft Welsh midfield defence and, after a rusty start, Earls looked the part, especially on the ball, where his footwork and acceleration rooted Welsh defenders to the spot.

Few other, if any, Irish backs have the footwork and speed off the mark to beat Scott Williams and Dominic Day the way he did, much less bounce Hallam Amos before the covering Richard Hibbard denied him a try. Allowing for a couple of minor blemishes, he also tackled big.

The good impressions of his comeback with Munster last season have been confirmed. Earls goes to the World Cup. Simple as.

His 14th try in his 40th Test soon followed after a trademark, man-and-ball hit by Andrew Trimble on Eli Walker. Schmidt would also have loved Trimble’s chasing and competitiveness in the air. He was the pick of the outside backs, although both Felix Jones and Fergus McFadden ran strongly and made big yardage.

While the Welsh debutants had mixed days, some of their more experienced players were the most culpable. The Mike Phillips-James Hook partnership combination was ponderous, and Scott Williams missed tackles and dropped balls most uncharacteristically. Captaincy didn’t seem to agree with him.

New half-backs should always have a positive impact and Lloyd Williams and Gareth Anscombe injected more pace on the ball and shape to Wales’ running game.

Schmidt was not happy with the way Irish defending slackened off, especially in the last quarter, and it seemed they lost a little of their line speed out wide – becoming a little softer – after losing Trimble five minutes before half-time.

Ireland also lost their cohesion a tad amid all the changes, although Dan Tuohy put himself about and Ian Madigan added some real zip to Ireland’s attacking game with his running and passing, as did Simon Zebo.

Aside from his close-range finish from Tommy O’Donnell’s pass, Zebo put through one lovely little grubber along the touchline and set up Jones for Ireland’s fifth try with a sumptuous, double skip pass.

It prompted Schmidt to say afterwards: “I thought Simon’s pass to the edge for Felix to score – I’m not sure he had to go all the way to the edge – but he demonstrated he could do it. It was reminiscent of the one he gave to Jared Payne against Italy during the Six Nations and some of the skills that he brings to the table.”

Aside from the ability to start Test matches, impact off the bench in big games as well as versatility will be a factor in the composition of the Schmidt’s 31-man squad, and no less than Madigan, Zebo ticks both of those boxes.

Wales have evidently been more focussed on physical training than on rugby practice per se. But history has also shown us that, unlike Ireland, Wales are the slowest of slow starters.

The earliest these two countries can meet at the World Cup is the semi-finals and, whether they meet then or not aside, it will be fascinating to see how the two contrasting approaches work, say, come the fourth pool game or the knock-out stages.