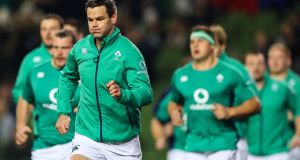 Joe Schmidt has named a 40 man squad for the opening two rounds of the 2017 Six Nations Championship.

Johnny Sexton is among the 40 despite picking up a calf injury at the weekend.

Leinster coach Leo Cullen had appeared reasonably confident after Friday night’s Champions Cup draw with Castres that Sexton’s calf injury - which forced his withdrawal after 21 minutes - would not jeopardise his involvement in the Six Nations.

Rory Scannell was the 24th man during Ireland’s win over Australia at the Aviva, and the 23-year-old centre has continued his fine form since that call up.

His older brother Niall will compete with James Tracy for the back-up hooker position, in the absence of the injured Sean Cronin.

Ireland travel to both Edinburgh and Rome over the course of the first two rounds of this year’s Championship facing the Scots in Murrayfield on Saturday 4th February before flying to Rome to take on Conor O’Shea’s Italian side on Saturday 11th February.

Schmidt commented, “It has been good to watch the players over the past two months and great to see many of them doing so well.

1 Jack Nicklaus’ Trump endorsement leads to avalanche of dismay
2 Six Nations - France v Ireland: Kick-off time, TV details, permutations, team news and more
3 World Handicap System: What is it? How does it work? Will my handicap change?
4 Here is your handy guide to sport on television this week
5 Return of Conor Murray’s box kicking could exploit French vulnerability
Real news has value SUBSCRIBE