Munster grit their teeth to get the job done 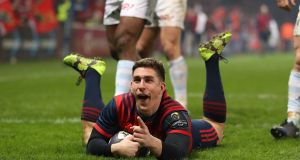 This special, never-to-be-forgotten campaign offers each game as a compelling chapter in an almost miraculous, albeit devastating, story.

“Drive on now Munster,” roared the old diehard after Ian Keatley latched onto Andrew Conway’s exquisite offload for the third try. When the noise abated his younger companion imparted some conspiratorial words.

At 22-10 with 10 minutes to play the job was already done. Munster needed to win by 11 points to secure a home quarter-final for the first time since Toulouse were ravaged at Thomond Park in 2014.

This result will be glossed over in time but the reigning Top 14 champions showed up to play for Ronan O’Gara – who was Racing’s de facto head coach last week – and to reignite their domestic campaign.

But in just seven months Jacques Nienaber has constructed a dominant defensive system that conceded only four tries in six Pool games (18 going the other way).

Of course CJ Stander matched all comers, either side of the ball, with his 18th man of the match award of the season.

So, this second seed finish, seeing off the mighty Saracens by two points, is just reward for a string of performances that, as O’Gara noted afterwards, would be a 13-game winning streak if not for Owen Williams’ 53-metre penalty at Welford Road. He would know all about them.

“I forget how good this place is if you are a Munster player,” said O’Gara afterwards. “Driving in on the bus was really cool. All the Munster flags. Unfortunately it is only when you’re finished you kind of appreciate how good Munster have it.”

This new journey is many miles from its destination, Rassie Erasmus is constantly telling us. But several players whose worth as professionals many people questioned last season have now taken ownership of the team. The likes of Rory Scannell at inside centre – who had a key hand in Ronan O’Mahony’s try and broke Racing spirit with the quality of his touch finders – along with confrontational tighthead John Ryan stand as key figures now.

The Same can be said about Tommy O’Donnell and Duncan Williams who become leaders in the absence of Conor Murray, Stander and O’Mahony during the Six Nations.

Edinburgh, the Dragons, the Ospreys, Scarlets and Cardiff will provide a rigorous examination of Munster’s strength in depth but the Maori victory last November did show encouraging glimpses of what lies beneath the first XV.

“Big things can go wrong, like two or three injuries,” warned the ever cautious Erasmus. “I know we lost James Cronin with his thumb, Dave Kilcoyne is going to the national set-up for a while and Thomas du Toit is going back to South Africa so [at loosehead] and other positions we might be really thin.

“We are in the position now, we have to see if we can kick on.”

But Eramsus has been in this position before. In his first season as Cheetahs coach they shared the Currie Cup with the Blue Bulls. That’s an achievement comparable to what is unfolding in Limerick.

When Tyler Bleyendaal converted from the touchline to make it 17-3, with a half an hour remaining, Munster lost all intensity. Henry Chavancy’s try, converted by Maxime Machenaud, punished them and at that moment they were travelling to France or England in the quarter-finals.

Peter O’Mahony stood up and was counted when Racing threatened to spoil this celebratory march back to European rugby in April. Same can be said about the breakdown work of Kiwi hooker Rhys Marshall.

Munster rumbled towards the left corner flag but Conor Murray knew precisely where the space could be exploited. Bleyendaal and Scannell threw looping passes to the far right before Conway brilliantly fended off Bruce Dulin then put Keatley over.

“It was certainly not a polished performance,” Erasmus added. “I think this is a team that one day has the potential to win cups if we groom the squad in the weak places where we need better players. But sometimes you get lucky, you don’t get injuries, you catch teams on a bad day.”

The fortress rebuilt, nobody wants to come here in the Spring.