Six Nations 2021: Inexperienced Italy could be in for a long few weeks 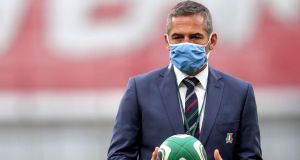 Franco Smith is without a win after mroe than a year in charge of Italy. Photograph: Bryan Keane/Inpho

The numbers make for grim reading. Italy went without a Test victory in 2020, losing all eight of their fixtures. They haven’t beaten a tier one nation since their 20-18 win over South Africa in November 2016. You have to go back to February 28th 2015 to find their last Six Nations victory, when they beat Scotland 22-19 at Murrayfield. For the Azzurri, it is a worrying run, with the gap between themselves and the rest seemingly getting bigger rather than smaller. Ending a run of 27-consecutive Championship defeats will be their target in 2021 - but what are their hopes of stopping the rot between now and March 20th?

In many ways, this is a new-look Italy. Sergio Parisse and Leonardo Ghiraldini have both departed, taking 249 caps-worth of experience between him. To put that into perspective, the 32-strong squad Franco Smith has selected for this year’s tournament has a combined 400 caps between them, with Tommaso Allan the most-capped player with 60. Perhaps the Azzurri’s lack of experience will be an advantage - fewer bad memories - but they face a baptism of fire at home to France in the opening round. Jake Polledri is a big loss for Italy, the Gloucester backrow is a world class ball carrying option but will miss the tournament with a knee injury. The addition of Australian winger Monty Ioane, who made his debut last year, is interesting but there will be no Matteo Minozzi - he has pulled out of the squad citing tiredness. The 24-year-old has 11 tries in 22 international appearances and his absence is another significant blow.

With Minozzi and Polledri both missing, Italy’s difficult task looks even harder. It could be a long few weeks for Smith’s fledgling side.

Franco Smith is another head coach who will be hoping for a fresh start in 2021, after taking up the role just before the world went into meltdown. The 48-year-old former Springbok took over from Conor O’Shea on an interim basis at the end of 2019 - he was given the permanent job in June of last year. Smith’s first term was winless, but he deserves more sympathy than most for struggling in 2020, especially when the size of the task he took on is taken into account.

Smith leads an inexperienced squad into his second Six Nations and has been denied the services of arguably his two best players in Polledri and Minozzi. He has recognised transforming Italian fortunes won’t happen overnight, and at the tournament launch he said: “It is not a one-game process, it is not a one-year process. We want to really set the standard and encourage the young guys.” Smith’s long-term focus is probably sensible - but a win in the short-term would do him and the Azzurri a world of good.

Luca Bigi was made Italy captain at the start of the last Six Nations, taking over from long-time incumbent Sergio Parisse. A relative newcomer to the international arena, Bigi didn’t make his Azzurri debut until 2017 when he lined out against Scotland. The 29-year-old now has 32 caps to his name after wrestling the number two jersey off Leonardo Ghiraldini, who recently retired. It is a testament to Bigi’s leadership that he selected to replace Parisse as skipper - the Zebre forward must marshal his pack with aplomb and ensure Italy’s set-piece is faultless if they are going to end their tournament drought.

This would have comfortably gone to Polledri, who was named Italy’s player of the year for 2020 and has established a reputation as a fearless ball carrier who would have provided much of the Azzurri’s ballast. With Minozzi also out it might be down to Mattia Bellini to provide some magic from the backfield in his absence. 26-year-old Bellini has a very respectable 11 tries in 28 Test matches - although he only managed one score in seven appearances last year. A dangerous runner from deep, he is likely to need every bit of counter-attacking skill and finishing nous to help lift Italy off the bottom of the table.

Ultimately, it is hard to see Italy ending their winless run in this year’s Championship. Smith’s inexperienced squad could easily give the visiting Ireland and Wales something to think about but they look destined to end with the wooden spoon once again.

3 LeBron James tells Zlatan Ibrahimovic: ‘I will never shut up’