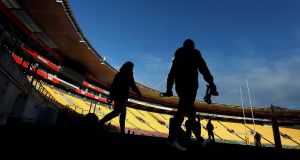 The British & Irish Lions’ final midweek game of their 2017 tour is shaping up to be a collector’s item. As things stand there are set to be only eight matches on the 2021 itinerary in South Africa to permit extra preparation time and to assist player welfare, with no further provincial fixtures once the test series commences.

It potentially gives the management one less pre-Test headache but the consequences of shrinking the present 10-match schedule could be unexpectedly profound. Only five warm-up games and three Tests could mean a squad member outside the first-choice lineup featuring only twice in six weeks, with scant chance to stake a claim for Test recognition. The whole mass emotional buy-in, competitive buzz and shared brotherhood that makes a Lions tour so special risks being fatally compromised.

At some stage it will be fascinating to hear from the unused temporary cover players bussed in by Warren Gatland whether their experience proved entirely fulfilling. So far only Scotland’s Allan Dell has actually made it on to the pitch, with the other five – Kristian Dacey, Tomas Francis, Cory Hill, Gareth Davies and Finn Russell – still waiting to be officially classified as Lions. All are due to leave the squad after the fixture against the Hurricanes, having spent just over a week in a weird twilight zone, shadow Lions in practice but not in status.

While a shorter tour would lessen the need for such selectoral contortions in future, it might be an idea if the game’s power brokers approached players such as Courtney Lawes for their first-hand opinions. Lawes has been among the most forceful Lions forwards out here but an unlucky bang to the head against the Highlanders has left him playing a frustrating game of catch-up. Without this Hurricanes game, or its equivalent, he would be reduced to holding tackle bags for the tour’s final fortnight.

As it is the Northampton forward still has an opportunity, if he grasps it, of featuring in the 23 for the second Test on Saturday when the Lions will need all the extra physicality they can muster in the starting line-up and on the bench.

That same theme was reinforced by the forwards coach Steve Borthwick and the centre Robbie Henshaw after the Lions’ captain’s run at Jerry Collins Stadium, the scenic ground just north of Wellington where the much-missed ex-All Black flanker started his club career.

“We just need to take it to another level this week,” Henshaw said. “We all know we need to be better but we’ve got the players to do that. It’s an attitude more than an action and that mentality will be key.”

Henshaw also agrees with Gatland that the match officials should keep a sharp eye out for opponents who target the exposed standing leg of his Irish team-mate Conor Murray after he puts up a box-kick.

“If the guy’s clearly going for a block down and going for the ball and follows through and hits the player that’s not his fault,” Henshaw said. “But if he’s nowhere near the ball and he’s hit our guy off the ball, it needs to be looked at. The referees might look at it in detail and see but at the moment we’re okay about it. We know teams are going after our key players to put them under pressure and to try to shut them down.”

Last November’s rugged game between Ireland and the All Blacks in Dublin, when the 24-year-old’s participation was ended prematurely by a heavy tackle from Sam Cane, also underlined just how narrow the line is between legitimate force and unacceptable on-field behaviour.

“We know how physical they are as a team, it’s a test match,” Henshaw said. “For us, physicality is also one of the fundamental components in rugby. Everyone uses it in abundance. I don’t think they take it too far.

“Sometimes in the moment people may get their entry wrong, stick out an arm and hit someone high. It’s not intentional and people make mistakes but obviously it’s down to the officials what happens on the pitch and needs to be taken care of.”