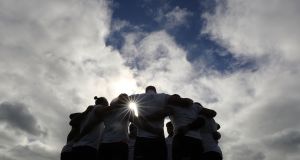 The forwards huddle during the Captain’s Run ahead of the Lions’ game against the Wellington Hurricanes on Tuesday. Photograph: Dan Sheridan/Inpho

First off this is about winning a match for the Lions in its own right and for those players involved specifically, but there’s also the need for reviving the mood within the tourists’ camp in advance of Saturday’s win-or-bust second Test on the same ground. Any lift will do, whereas another defeat would not be good for morale.

So often the final midweek tour game finds the midweekers condemned to feeling like dirt-trackers and thus virtually going off tour at this point. Yet the selection of Liam Williams and Elliot Daly from the starting side which beat the Chiefs a week ago for the first Test demonstrated that form will be recognised in the midweek games, even in Test weeks.

“There is definitely an opportunity for players to go out and impress,” said Warren Gatland. “The message from the 2013 Lions tour in Australia is there were significant changes between the first, second and third Tests. So there will be opportunities against a quality side, the Super Rugby defending champions. There are some areas we need to improve on from Saturday and these guys get a chance to go out and show their wares.

“They have been preparing well and know we need to step up and give a good performance. They get a chance to go out there and be very physical, both defensively and in the contact area in attack. That was the one area that was disappointing from our point of view on Saturday. But there were lots of things that we did that were incredibly positive and that we can build on.

“There’s no hiding away from the fact that this week is really, really important for us. So to get a good performance and a good victory on Tuesday night to build into Saturday is going to be pretty crucial for us.”

There’s also the history of four years ago. On the Tuesday before the second Test, the Lions put in a convincing 35-0 win over the Melbourne Rebels. Only five of the matchday squad were on duty again four days later in the second Test, but by the decisive third Test 10 of the 23 involved against the Rebels featured, four of them starting, namely the backrow of Dan Lydiate, Seán O’Brien and Taulupe Faletau, as well as Richard Hibbard, with another six on the bench.

Of course, this is not quite a like-for-like comparison. The Lions are one-down against inestimably tougher opponents in the Test series, rather than one up as they were then. And if 10 or more make the third Test, it could well because the All Blacks have clinched the series.

Even so, opportunity knocks. With Thursday’s first-team selection for the second Test here on Saturday in mind, this may well be the case for Iain Henderson and Courtney Lawes, if they can back up some good form of late, if only to be on the bench.

CJ Stander backed up his impressive impact for 25 minutes against the Chiefs by digging deep with a sterling endgame just four days later against the Highlanders, and put in another impressive 80 minute shift against the Hurricanes. He must be knocking on the door of the Test 23.

Dan Biggar has been playing very well on tour, albeit the number 10 door looks closed. Gatland is a known admirer of Jonathan Joseph, whose absence since the Highlanders game a fortnight ago has been partly attributed to a wrist injury, and Jack Nowell. Nowell’s selection at fullback also suggests he is in the frame for back three cover in the Test 23, while this game affords George North an opportunity to remind the Lions coaches and everyone else of his game-breaking abilities. Others will assuredly feature too, not least given the risk of injury.

Yet a chunk of this team won’t have the same desire to break the midweekers’ winning duck that they had in Hamilton a week ago. Nor will they have much impact off the bench, in the likelihood that they’ll be asked to go 80 again, while this looks an altogether stronger Hurricanes outfit than a Chiefs team missing 10 of their All Blacks and Maoris.

By contrast, the Super Rugby champions have been replenished with three of their current All Blacks squad members Julian Savea, Jordie Barrett and Ngani Laumape, who will join fellow All Blacks Jordie Barrett and Nehe Milner-Skudder in the backline alone, and a pack featuring Vaea Fifita, a try-scoring debutant for the All Blacks off the bench against Samoa.

All told, they retain nine of the starting team from the thrilling 17-14 defeat to the Chiefs two and a half weeks ago which ended their unbeaten home record this season. To put the comparative fixture four years ago into perspective, they beat the Rebels 71-6 in their first home game of the season.

And once more the Lions will come up against a fired-up home team embracing a once-in-a-lifetime opportunity in front of a sold out Westpac Stadium. Which, of course, makes both the collective and individual performances more relevant.

Scotland break Six Nations duck in Rome 16:24
Devin Toner: it ‘means the world’ to be back in the Ireland side 15:27
Revitalised Chelsea bounce back with crucial win over Spurs 14:50
Matt Doherty urges for calm after Wolves’ ‘perfect night’ 12:46
Equestrian: Bertram Allen scores in Winter Festival 12:38
Here is your handy guide to sport on television this week