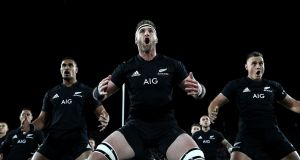 After a 15 point victory you’d imagine it’ll be the hosts who’ll be licking their lips. 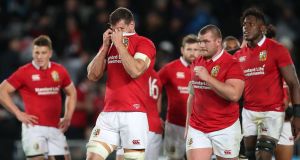 Perhaps not since the millennium loomed had there been a build-up quite like it. And while some sporting strays might have assumed Sky’s countdown clock was ticking towards the start of qualifying for the Azerbaijan Grand Prix, the rest of us knew ‘The Day of Destiny’™ was closing in.

And nobody had us more pumped up than Scott Quinnell, who had the sound of a man who might spontaneously combust once the clock hit 00:00:00.

If Scott ever decides on a career switch he could effortlessly take up the post of evangelical preacher in a Texan megachurch, the man imbued with so much faith in the Lions that if he got to lay his hands on the All Blacks they wouldn’t have left the Eden Park changing rooms.

“How are the nerves,” Alex Payne had asked us when he welcomed us to Auckland not all that long after dawn had cracked, and we were about to say ‘grand’ until he began intimating that the impending game was a considerably more serious matter than life and death and all the bits in between.

“They say that to be a Lion is the greatest honour - to be a victorious Lion, well that defines you,” he suggested, before declaring that what the Lions were about to take on was “the greatest challenge in team sport”. Westmeath fans heading to Croke Park tomorrow might beg to differ.

Out on the pitch the brass band was provocatively doing the Haka, a brave move in light of that fact that Scott was patrolling the touchline for Sky, the musicians thereby risking having to have trombones and cornets surgically removed from locations where the sun rarely if ever shines.

Up in the commentary box Sir Ian McGeechan, Stephen Ferris, Sean Fitzpatrick squeezed in beside Alex, their eardrums imperilled by the fact that their host APPEARED TO FORGET HE HAD A MICROPHONE.

Time for a quick chat with Beauden Barrett, who told us that his earliest memory of these encounters was 2005, which would have left much of the audience feeling as ripe as Methuselah.

Stephen listed Beauden as one of the men the Lions had to fear, as well as Ben Smith, Israel Dagg, Ryan Crotty and Sonny Bill Williams, Sir Ian adding Rieko Ioane, Aaron Smith, Joe Moody and Codie Taylor, Sean throwing in Owen Franks, Brodie Retallick, Samuel Whitelock and Jerome Kaino, Alex offering Sam Cane and Kieran Read. Apart from that, though, the All Blacks were light on threats.

Just before we were handed over to our commentary team we were treated to a rousing call to arms from Sir Ian, the gist of which was that if any of the Lions had a stinker they’d be betraying every man who ever wore the shirt. “You have to say ‘everything I’ve got I’m prepared to put in to that jersey’ - and what you get is a power and will that defines you,” he said over highly emotive music. At that point Peter O’Mahony appeared in the tunnel holding his cuddly lion, not dissimilar to one of those that used to appear on the Generation Game conveyor belt (Beauden Barrett: “Huh?”), and all you could think was, ‘no pressure, Pete’.

“It is hard to remember a series in the history of the game with such a build-up, but that is the way of the world now,” said Miles Harrison. Of Sky Sports.

The match? Well, Sean O’Brien scored a try that is destined to get more YouTube views than that 1973 effort by Gareth Edwards (Beauden Barrett: “Who?”),’ but aside from that it was the All Blacks rather than the LiiiiiiiooOOoons who largely roared. Miles and Stuart Barnes tried to convince us that Rhys Webb’s late, late consolation try would send the Lions in to the second test purring, but after a 15 point victory you’d imagine it’ll be the hosts who’ll be licking their lips.

Time to restart the countdown clock for The Day of Destiny: Part II™. Sky have sent Scott off in his Fan Van again, the fella tasked with finding LiiiiiiiooOOoons fans who still belieeeEEeeve. Needle, haystack?

Dana White: Conor McGregor to fight Dustin Poirier again in July 13:12
Simon Zebo is heading back to Munster next season 13:52
Seedorf wants to stop players covering mouths while talking 11:44
Liverpool leaning on Salah more than ever right now 11:20
Four Leinster players nominated for European Player of the Year award 10:37
Crossword Get access to over 6,000 interactive crosswords