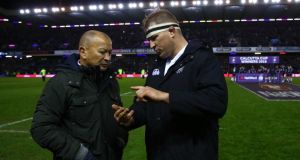 Dylan Hartley is a doubt for England’s clash with France. Photograph: Michael Steele/Getty

Dylan Hartley has emerged as a doubt for England’s Six Nations clash with France on Saturday, while Jack Nowell and Sam Underhill have been ruled out of the trip to Paris.

Hartley is struggling with a tight calf and is being monitored daily as Eddie Jones’ men prepare to enter the final phase of their ailing title defence.

Nowell and Underhill, both of whom have acted as second-half replacements in the opening three rounds of the tournament, are unavailable due to respective ankle and toe injuries sustained in training over the weekend.

It is the development over Hartley’s fitness that is of gravest concern, however, as England face the prospect of losing their captain as they seek to atone for their 25-13 loss to Scotland.

Jamie George is poised to start at hooker — the position he filled for the British and Irish Lions against New Zealand last summer — if Hartley fails to recover with Owen Farrell the likely replacement as skipper.

And in a further blow to front row resources, replacement tighthead prop Harry Williams is struggling with a neck injury.

“Dylan trained yesterday (Monday) and felt a bit of tightness afterwards. He reported that and the decision of the medical team is to monitor it daily.”

England have cover for the pair in the form of hooker Luke Cowan-Dickie and prop Kyle Sinckler, who are included in a 27-man squad retained for final preparations ahead of the trip to the Stade de France.

The severity of Nowell’s injury means he is also likely to miss the climax to the Six Nations against Ireland on Saturday week, but Underhill could be back for the final match at Twickenham.

“Jack Nowell rolled his ankle in training, the same ankle that he injured earlier on this season. He has returned to Exeter,” Borthwick said.

“It happened at the weekend and we did a further investigation late yesterday and a decision was made then.

“Sam took a knock to his big toe after someone trod on it. It’s flared up so he’s not in contention against France.

“We want them to recover from their injuries a quickly as possible. It’s unlikely that Jack will be fit for Ireland, but we hope Sam’s injury will calm down quickly.”

Underhill’s place on the bench is likely to be filled by James Haskell, while Elliot Daly, who has recovered from ankle and calf problems, plugs the gap created by Nowell’s injury.