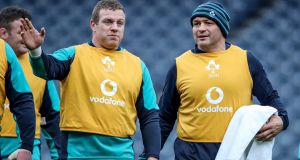 Seán Cronin is in line to make his first Six Nations starts against Italy in Rome. Photograph: Dan Sheridan/Inpho

Seán Cronin is set to make a rare start for Ireland against Italy in Sunday’s Six Nations game at the Stadio Olimpico (kick-off 4pm local time/3pm Irish) and Jack Carty could be in line for his Test debut if, as seems possible, he is named on the bench when Joe Schmidt unveils his matchday 23 at lunchtime on Friday.

If so, it will be a fair and somewhat overdue reward for Cronin, as the 32-year-old Leinster hooker is arguably having the best season of his career to date. Furthermore, although this will be Cronin’s 68th Test, it will only be his 10th start for Ireland and, even more remarkably, his first start in the Six Nations after making all 32 of his previous appearances in the competition off the bench.

All in all, the likelihood is that the Irish management will opt for some eye-catching selections in what is easily the most unpredictable line-up of the Six Nations to date, while at the same time resisting the temptation to make too many alterations, as Warren Gatland did for Wales’ trip to Rome in round two when making 10 changes.

There had been speculation that this game would provide the ideal opportunity to give Joey Carbery a first start in the Six Nations as well after his near 60 minutes on the pitch in seeing out Ireland’s win in Murrayfield.

However, the management have an understandable desire to grant Johnny Sexton more game time after a combination of a knee tendon problem sustained against Munster in Leinster’s festive trek to Limerick and then a head injury he received during his battering in Murrayfield contrived to limit him to just 103 minutes of rugby this year.

Furthermore, apparently Carbery has picked up an injury in training, and with Ross Byrne having been selected to play for Leinster, Carty is thus in line to be named on the bench.

No less than Cronin, the 26-year-old Carty is enjoying his best season so far, showing more maturity and composure in his game management, and his kicking game, while inventively pulling the strings for a rejuvenated Connacht.

Not having reached last year’s Grand Slam level of performances in the opening two rounds, Ireland’s primary need from Sunday’s game is to build some confidence and momentum as a means of adding two more wins at home to France and away to Wales.

This has also to be balanced with easing the load on some frontliners, especially forwards such as James Ryan, while affording more game time to some players short on match hardness of late, ie Seán O’Brien, Conor Murray and Sexton. In all of this, Schmidt and co are probably mindful that there is just a six-day turnaround between the French and Welsh games.

As assistant coach Richie Murphy put it: “Obviously there’s a couple of guys who have come in over this period for the first time and they’re probably learning, but a lot of the other guys have been around for a long period of time. They understand what it means; one, to play for Ireland; and two, to fit into our systems and be able to take the team forward.”

“So the changes in relation to this week, there will be some changes in the team because it’s only natural, that will happen, but I can’t see it being wholesale.”

It could be therefore that David Kilcoyne comes into the frontrow and Ultan Dillane into the secondrow alongside Connacht team-mate Quinn Roux. If so, akin to Cronin, this would also mean a first start in the Six Nations for Kilcoyne and Dillane, each of whom have made six appearances in the tournament, and all off the bench. John Ryan is also set to be recalled to what would then be an entirely changed frontrow, or to the bench, given Andrew Porter is on Leinster duty.

Jordi Murphy, something of a good luck charm for Schmidt’s Ireland and also well versed in Ireland’s systems, could also be in line for just his third start in the Six Nations in what would be the 27-year-old Ulster backrower’s 27th Test.

Robbie Henshaw could well be recalled, although conceivably, were the coaching staff not of a mind to re-instate him given he only resumed training this week after a hamstring injury ruled him out of the Murrayfield game, the backline could remain unchanged.

However, in addition to Carty possibly replacing Carbery, it seems as if there will be at least one more change among the backs in the 23 as word is Jordan Larmour picked up a finger injury in training.

With Will Addison back in Ulster to undergo treatment on a lower back problem, this would suggest that either Henshaw or, perhaps more likely, Andrew Conway, will come into the 23, not least as they can each cover fullback.