Samoa in the firing line as Springboks plan powerful response 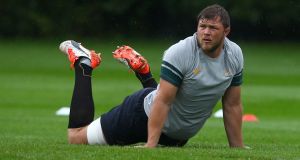 South Africa’s Duane Vermeulen: “If we don’t win we are out. We have to give our all. I’m ready to do that.” Photo: Steve Haag/Gallo Images

A history of violence. Recent cuddlings of these gargantuan men is drenched in bloody yet wincingly enjoyable rugby.

There have been 50-pointers in 2013 (56-23) and at the 2007 World Cup (59-7) but Samoa rattled the Springbok machine during a vicious North Harbour affair four years ago. A match littered with scraps ended 13-5 after Paul Williams got sent off for a palm slap on Heinrich Brussouw while the flanker’s two clean punches and forearm smash went unpunished.

It’s like the hardest nuts from neighbouring schools falling out over who sits at the back of the bus. Neither understands conciliation nor reason.

“I’m not scared,” went a smiling Duane Vermeulen when the Samoan physical threat is mentioned. Just look at him. Paul O’Connell’s team-mate at Toulon this coming season has no need to fear another man.

Maybe he should fear himself. Vermeulen stood over us this week in Birmingham’s Convention Centre like the third Clegane brother. But like all goliaths he cannot comprehend being felled by slinged stone.

That’s both Springbok strength and weakness wrapped together. He had neck surgery three months ago but is ignoring medical advice at this dire hour. He’s had to suffer South Africa’s most embarrassing defeats – to Argentina at home and Japan in Brighton – in 124 years.

“If everyone has the mental attitude and desire Duane has to play for South Africa we probably won’t lose any games,” said Heyneke Meyer.

“The plan was to let him play 20 minutes and get him into the next game but he came forward and said ‘I don’t care what the doc says I am going to play on Saturday, 80 minutes if that what it takes to win.’ It’s great to have him back. He’s a warrior. We need 23 warriors.”

In the aftermath of the Springboks’ defeat to Japan, the consequences of another defeat have never been so serious.

Jake White, the 2007 World Cup-winning coach, reportedly said they have lost their identity.

“I don’t listen to any of that crap...It might look from the outside that we have lost our identity. It certainly doesn’t look like it from the inside. We definitely are going to go back to our strengths. You are going to see that on Saturday.”

“We’re up against a very angry team this weekend,” said a smiling Cenus Johnson, 34-year-old Toulouse prop having abandoned international retirement to perhaps screw the Beast in a scrum or two.

“They are going to be breathing fire this weekend. We have to fight fire with fire.”

Wayne Barnes is today’s referee so Samoa can’t entirely ignore their other natural gifts. Tim Nanai-Williams, cousin of Sonny Bill, has been tearing it up for the Chiefs in Super Rugby while Tuilagi abides, leading a team his youngest brother, Manu, should also be part of.

Rugby transcends sport in South Africa but equally mirrors it. This past week provided further evidence of this during Meyer’s impressive performance as Tuesday’s press conference was broadcast live across what Archbishop Desmond Tutu perhaps overenthusiastically termed the Rainbow Nation.

The head coach’s performance transported the tone away from sporting realms when explaining his decision to award Jean de Villiers his 109th cap.

“I decided that if you go into a fight that you have to win, your whole career, your whole land, your country depends on, if I’m going into that with a guy who has had six knee operations and come back.

“He got injured again just before the World Cup when even the specialists said he won’t play again. He came back and proved them wrong. And then he broke his jaw and again people said it won’t be Jean’s year.

“You know if we South Africans maybe back each other more South Africa will be a much better place with less hate and less violence and more love. So, I am going to go with my captain. I’ve got total confidence in him. If you go into a fight that you have to win, I want to go in with a guy who knows how to fight, how to lead, how to win.”

South Africa remain hulking bullies, the Afrikaans mentality is to splinter opponents with a relentlessly direct approach. Ireland used that power against them last November, out witting them, running them until the heavies tired. Japan’s tactical masterclass was similar.

This will be the unfurling of Springbok power in all its glory. If Meyer can finally blend his elder Boks with the creativity of André Pollard and Willie le Roux they might yet win this tournament or at the very least make Japan’s victory a beautiful aberration.