There’s a photo of my old man with Hamilton, who is clearly thinking, ‘Who’s this knob?’ 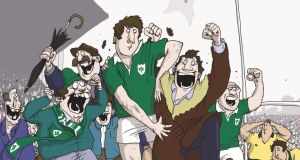 I was sitting in Kielys of Donnybrook Town recently with my famous tactics book in front of me, scribbling down a few thoughts I had about the beautiful game – as I sometimes do – when it suddenly occurred to me that I could actually tell the story of my life through World Cups.

Back in 1987, when the tournament storted, I was a young boy in the first flush of love with the sport. In the 20-something years since then – you do the math – I’ve gone from being the kid who everyone expected to play in a World Cup one day, to being the number 10 who a lot of critics felt should be at the World Cup, to being one of the greatest Irish players to never play in a World Cup. I’m proud to say that it’s for the latter that I will probably be forever known. It’s nice to be connected with the Greatest Show on Earth, even in my own modest way.

I remember the very first tournament like it happened yesterday. At the time, we were living in an area that my old pair insisted on calling “Glenageary” but which everybody else in the world knew as “Sallynoggin”.

My old man kept me off school and took me to a boozer called the Noggin Inn – it’s still there, I’m told – to watch Ireland’s opening match against Wales. The place was closed up. It was, like, 10 o’clock on a weekday morning and anyway Sallynoggin was very much a soccer town. I remember the old man hammering with his open palm on the metal shutters, shouting, “Are you opening up at all today? There’s a bloody well World Cup on, don’t you know!”

To which the response, from inside, was, “The Wurdled Cup was last year, you stupid, yuppie bollocks.”

From such humble beginnings, the tournament, as we know it today, was born.

By the time the second World Cup rolled around in 1991, we’d moved to Foxrock, my old pair having suddenly and mysteriously come into a lot of money. But then you know all that from the tribunal coverage. I was in my final year in Castlerock Junior School, my hero was Simon Geoghegan and I went to bed every night with a Gilbert rugby ball clutched to my chest, which may have accounted for the occasional bouts of heart arrhythmia I suffered as a child.

My old man got tickets for Ireland’s quarter- final against Australia at Lansdowne Road. We were sitting in the Lower West Stand when Gordon Hamilton crashed over the line to score what looked like the winning try a couple of minutes from the end. In the excitement of the moment, the old man was one of the 50 or so fans who invaded the pitch. On the wall of Doheny and Nesbitt’s, to this very day, there’s a brilliant black and white photograph of him, in his famous Cole Haan camel hair coat, with his orm around Hamilton’s shoulder and Hamilton is clearly thinking, ‘Who’s this knob?’

Of course, as fate would have it, Australia went straight down the other end, Michael Lynagh scored a try and the dream was suddenly over. On the walk back to the Berkeley Court, the old man told me that Ireland lost because they lacked the killer instinct. “Remember this lesson,” he went. “Winning isn’t everything. You must also grind your opponent’s face into the dirt.”

I must have taken that advice onboard, because, by the time the tournament in South Africa came around, I was an obnoxious – yes, me! – Leinster Schools Junior Cup winner with a reputation for flashing my abs at opposition fans whenever I scored a try.

The 1995 World Cup made a massive, massive impression on me. Jonah Lomu. Francois Pienaar. That dude, Something Mandela. Happy, happy times.

The old dear took me to Peter Mork in the Merrion Shopping Centre and I got the famous Lomu Cut – a blade zero at the back and sides and a blade four on top. Except I didn’t look anything like Jonah Lomu. I looked like an apprentice housebreaker and I found myself being stopped by the Gords regularly that summer and asked what someone like me was doing on Westminster Road. “Who are you?” they’d go.

I’d reach into my shirt, show them the medal that was hanging around my neck and go, “This is who I am, you big, thick spud-worrier.”

I think my self-confidence was really storting to blossom into what it eventually became.

I remember on the morning of the final, my old man went into Baggot Racing and placed a £100 bet that I’d be capped by Ireland by the age of 25. He tucked the docket into a framed photograph of me scoring a try in the Junior Cup final, where it remained for eight years, the print slowly fading – a daily reminder of my failure to make the breakthrough that many expected.

In 1999, the World Cup was back in this neck of the woods. This time, the medal around my neck was a Leinster Schools Senior Cup medal. The game had turned professional and I’d just been accepted into UCD on a sports scholarship despite failing every single subject in the Leaving Cert. That was very much the spirit of the times. It was the Celtic Tiger and anything seemed possible.

I was in Lens with the old man when Ireland were knocked out by Orgentina. “Fear not,” he said, to anyone prepared to listen (it was never very many, despite the volume of his voice), “the future of Irish rugby is in safe hands! We are about to bear witness to a golden generation of players!”

Big things were predicted for me and a kid from Clontorf called O’Driscoll. Yeah, that goy!

My old man was right when he predicted that me and Brian would both be in Australia for the 2003 World Cup. Except that Brian was playing, of course, while I was driving around in a camper van, wearing a green, white and orange jester hat and watching the games as a (drunk!) fan.

Looking back now, you could say that our two paths diverged on a famous night in the Berkeley Court when I told Warren Gatland that he knew nothing about rugby. I think it took Brian until the Lions tour of 2013 to realise that I’d been right all along.

But my tendency to call it as I saw it definitely affected my career. I was frozen out for a long time and, even when Eddie O’Sullivan took over, I think he figured it’d be too much of a risk to include me in the squad for Australia, given that I hadn’t played the game for two years and I was drinking like a fish.

It was around that time that the betting slip from Baggot Racing disappeared from the picture frame in the living room. I asked the old man where it went and he said he knew nothing about it. But he said it with a shifty look in his eyes and a slight catch in his voice.

The 2007 and 2011 World Cups, well, I watched them like I’ll watch the 2015 one – in the pub in Donnybrook, with my own son sitting beside me. And despite promising myself that I’d never turn out like my old man, I have to say I got a fright four years ago, when Johnny Sexton scored his famous drop goal against Australia and I heard myself say to Ronan, “That’ll be you one day! I’d nearly put money on it!”

So there it is – like I told you, a lifetime measured in World Cups. I’ve loved them all. The excitement. The passion. The excuse for drinking alcohol at breakfast time. I never got to play in one – something I have in common with the likes of Mike Gibson, Jack Kyle and the great Willie John McBride. But as one of the greatest Irish players never to grace the tournament, I’m proud to have been part of its glorious history.