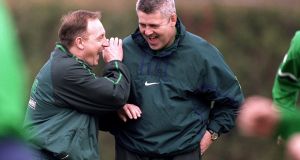 Eddie O’Sullivan, then assistant coach with Ireland coach Warren Gatland in 2000. He succeeded the Welshman in the role in 2002. Photograph: Billy Stickland/Inpho

Andy Farrell faces into his first Six Nations looking to infuse belief and momentum into the new regime.

The disappointment of the World Cup is largely irrelevant as a galvanising factor in the context of the upcoming tournament other than to absorb one or two lessons that remain pertinent to the style and structure of the team.

In examining the first season in charge of the last four Ireland head coaches in the Five/Six Nations the results incorporate everything from a wooden spoon to a Grand Slam and points in between.

When Warren Gatland took over from Brian Ashton in February 1998 one match into the Five Nations of that year, a narrow defeat to Scotland, Irish rugby was in a state of chassis.

The majority of the Irish team that lost to Scotland were playing their rugby in England; Denis Hickie (St Mary’s College), Brian O’Meara (Cork Constitution) and Reggie Corrigan (Greystones) were the exceptions. The IRFU was trying and failing to persuade players that a £35,000 salary, plus car in addition to £1,000 international match fees and a £3,000 win bonus was worth staying home for in the face of greater financial rewards abroad.

The union had identified the provinces rather than the clubs as the future of the game from a professional perspective but suffered periodic setbacks in terms of provincial coaching appointments. Brian Ashton had been handed a six year contract, managed to win one game in the 1997 Five Nations, endured a disastrous summer tour and, following the Scotland game in February 1998, decided he’d had enough.

Ireland had a bye in the second round of fixtures, and after Ashton resigned on February 20th, Gatland, his successor, took an Irish team to Paris to face the reigning Grand Slam champions on March 7th.

To offer some context, when Hickie scored a try in Ireland’s 18-16 defeat, it was the first by an Irishman in 18 years in the French capital, dating back to Freddie McLennan at the Parc des Princes in 1980.

The French went on to win a second successive Grand Slam. It was to prove a high point in Ireland’s season as the national side lost 30-21 at home to Wales, who beat Ireland for the first time since 1994, and also suffered a 35-17 defeat to England at Twickenham.

Despite the disappointment of the 1999 World Cup, under Gatland’s stewardship, the improvement in results was clear. Ireland won one match in the 1999 Five Nations, three in the 2000 Six Nations including Ireland’s first win in Paris in 28 years (courtesy of Brian O’Driscoll’s hat-trick of tries) and four in 2001, the year when Ireland’s final two matches were rescheduled for the autumn due to the outbreak of foot-and-mouth disease.

Surprisingly beaten by Scotland, Ireland denied England a Grand Slam with a Keith Wood-inspired victory over England at Lansdowne Road. Despite those figures Gatland was sacked – he is the only one of the last four Irish coaches to win his final match in charge – and succeeded by his assistant Eddie O’Sullivan.

His first game in charge in 2002 was a 54-10 thumping of a Graham Henry-coached Wales. Peter Clohessy won a 50th cap and Paul O’Connell made a try scoring debut before going off with concussion. The euphoria was quickly tempered by a 45-11 hammering at Twickenham before O’Sullivan watched his Irish side beat Scotland 43-22, on foot of an O’Driscoll hat-trick.

Italy, on a 12-match losing sequence found no better fortune in Dublin, losing 32-17 on a day when David Humphreys became Ireland’s record all-time points scorer; the match briefly interrupted by a streaker.

Ireland travelled to Paris in their final match but were riddled 44-5 as France won the first Grand Slam of the Six Nations era. It’s interesting to note that the current French coach Fabien Galthie, who will take charge of his first match next week, was captain that day, with Bernard Laporte, the coach. Ireland won three of five matches in O’Sullivan’s first Six Nations season.

During his tenure Ireland won three Triple Crowns, beat Australia twice, South Africa twice, and had four consecutive victories over England in the Six Nations. Despite a poor 2007 World Cup in France, the IRFU maintained faith in his stewardship of the national side but two victories in five matches in the 2008 Six Nations – six in the previous 14 games – saw him resign following a 33-10 defeat to Brian Ashton’s England at Twickenham.

Declan Kidney was appointed Ireland coach following Munster’s second Heineken European Cup triumph in 2008 and because of that commitment didn’t take the national side’s summer tour. His first game in charge was a victory over Canada in November, a game in which Keith Earls made a try-scoring debut.

From a players’ perspective a catalyst for the Grand Slam success was a meeting at the Marriott Hotel in Enfield, where fullback Rob Kearney raised the Leinster/Munster divide and whether the Munster players cared as much about playing for their country. The frank discussion had multiple benefits including knitting a commonality of purpose within the squad and deciding on a style of play from the players’ perspective that they were able to take to the coaches.

Ireland opened with a 30-21 victory over France at Croke Park, with tries from Jamie Heaslip, O’Driscoll and Gordon D’Arcy and then romped to victory with a 38-9 win over Italy at the Stadio Flaminio. Martin Johnson’s England arrived in Dublin, and their former captain-turned-coach fielded more questions about “Carpet-gate” in 2003 than any other aspect of the game.

The home side squeezed home on a 14-13 scoreline carried on the broad shoulders of O’Driscoll, who chipped in with a try and drop goal. Heaslip’s try allowed Ireland to escape with a 22-15 victory over Scotland at Murrayfield before Kidney’s side bridged a 61-year gap dating back to 1948 to claim a Grand Slam for only the second time in their history with a 17-15 triumph in Cardiff; Ronan O’Gara’s nerveless drop goal and ‘Christ the Redeemer’ celebration, an iconic moment in Irish sport.

A 22-15 defeat to Italy at the Stadio Olimpico in the 2013 Six Nations signalled Kidney’s final game in charge with Joe Schmidt appointed his successor in April, the Kiwi leaving his position at Leinster. His first match in charge in November was a win over Samoa, followed by a 32-15 loss to Australia, before Ireland watched a 19-0 lead evaporate before succumbing to a heartbreaking 24-22 defeat to New Zealand.

Still there was enthusiasm and momentum going into the 2014 Six Nations and that was further fostered by wins at home to Scotland and Wales before a narrow 13-10 defeat to England at Twickenham put a temporary brake on expectation. Jonathan Sexton scored a brace of tries in each of Ireland’s final two matches, victories over Italy and France.

Victory in Paris was doubly poignant as it marked O’Driscoll’s final match for Ireland but ensured that Schmidt’s team won the Six Nations in his first season in charge. He won two further championships (2015 and 2018), a Grand Slam (2018), a series in Australia and a first victory in South Africa.

He guided Ireland to a first ever win over New Zealand in Chicago and then a second victory over the All Blacks in November, 2018, at the Aviva – the first on Irish soil – while also taking the national side to number one in the world rankings. Schmidt, like Kidney before him, won the World Rugby coach of the year.

So the last four Irish coaches have managed to take Irish rugby to a better place during the respective tenures, a trend that Farrell will look to maintain.