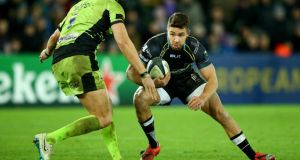 Rhys Webb likes to attack on outside and has shown ability to attack space at ruck. Photograph: Richard Heathcote/Getty Images

Mike Phillips for many years reflected the Warren Gatland era in Wales, a scrumhalf who relished confrontation and acted as an extra backrow forward. Rhys Webb, at 6ft and 14st 9lb, is similar in stature to the man he displaced last autumn but not in style.

Where Phillips likes to go through opponents, Webb will attack them on the outside and such is his capacity for exploiting space around the ruck that he commands attention from opposing backrows, giving his outhalf and midfield the luxury of time. Wales do not name their side to face England in the opening match of the Six Nations at the Millennium Stadium next Friday night until Wednesday but their willingness to release Phillips back to Racing Metro at the end of last week would suggest that the 32-year-old will remain on the bench.

“Rhys and I know each other’s games well,” said Biggar. “He’s a scrumhalf who is able to take the pressure off his half-back partner and absorb it himself. He does not send slow possession your way, he sees things quickly and he keeps defences alert. He is a major reason why Ospreys are top of the Guinness Pro12 at the moment and having a regional partnership at international level is an advantage because we know how the other is going to react through an understanding built over time.”

Webb snipes while his three-quarters charge. He made his international debut from the bench against Italy during the 2012 Six Nations. He played for Wales at under-18, under-19 and under-20 level and took part in the 2008 Junior World Cup before spending two years on the sevens circuit. He understudied Phillips at Ospreys and was at the region when the former New Zealand scrumhalf Justin Marshall joined.

“Rhys has been ripping teams apart,” said Gatland. “They will have done their homework on him and told players not to let him run, not to buy any dummies and close down his corridor. His challenge as a scrumhalf is to look at other options and not force the issue. That is part of the game and you have to keep a few things up your sleeve.”

Wales go into Friday’s encounter with England on the back of a rare victory over a major southern hemisphere nation, having defeated South Africa at the end of November. Gatland had the option of Phillips and the outhalf Rhys Priestland on the bench but Webb and Biggar remained on the pitch throughout, piloting a side that had developed a tendency to concede points and matches late on to victory.

Webb was chosen ahead of Phillips twice in last season’s Six Nations, at home to France and against England at Twickenham. Gatland saw enough then to persuade him to ease out a player who had been an instrumental part of Wales’s success in 2008 and trust someone who is hardly the face of Warrenball. Guardian Service