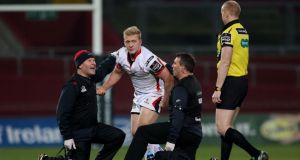 Concussion continues to hang over rugby like an unwelcome cloud. We can expect the World Cup to highlight the dangers and see how far the sport has travelled on what has been a steep learning curve. But the threat of brain trauma is becoming less sinister and more understood as academics in Trinity College Dublin begin to make inroads and promote some optimism.

In recent months researchers at the university doing work involving blood examinations, as well as using cadavers to see how body movement behaves on impact, have joined forces with Leinster Rugby for two innovative projects into the diagnosis and analysis of the injury.

One of the projects is based on studying the movement of human bodies in car accidents to help understand what positions and actions cause brain trauma in sports collisions.

The other is a simple blood test that shows up proteins that are associated with concussion. In time they hope a pin-prick test can be used to determine head injury. They have already identified what they call metabolic patterns that indicate trauma has taken place.

“Every activity in the body leaves a map,” says Dr Fiona Wilson, a former Irish rowing team physiotherapist, who along with physiologist Áine Kelly, is conducting the research into blood.

“The fluids of your body tell you a lot. It’s a protein and shouldn’t appear in the general circulation unless the blood brain barrier has been compromised. We are looking at these metabolites and early stages show we may have a map.”

This was to determine that the proteins found in rugby players were from multiple collisions and not physical exercise. From the injured patients they knew what “brain damage” proteins would appear in the blood.

“It’s the same as having a heart attack,” adds Wilson.”You go in to hospital with a pain in your chest and they measure cardiac enzymes. It’s like a brain injury. We know patients with brain injury so we can match our players against that.

“Our initial findings indicate that we have made significant progress in identifying the blood test. Collaboration with Steno Diabetes centre in Denmark means progress can be made towards a finger-prick blood test already familiar to diabetes management.”

In time, debates like those around Irish outhalf Johnny Sexton and Welsh winger, George North – should they or shouldn’t they return to play – will be measurable, a sort of Hawkeye for head injury.

The movement patterns, of bodies involved in collisions may appear ghoulish, but in scientific endeavour there’s no such thing as squeamish and dead people can often keep the living alive for longer.

Based on previous knowledge from experiments conducted on cadavers and studies of pedestrian crashes, they use mathematics to conclude what forces are in play and identify various tolerance thresholds.

From a database compiled over years of research, they can look at the kind of body movements and collisions that cause concussion. It takes several weeks to do a study, but with automation the goal is for real time use during rugby matches.

“The aspiration is to have a real time use. But we’re at early stages,” says Simms. “We are also reconstructing collision cases with ‘what if’ scenarios. For coaches, for example, you could ask what could a player do to effect a tackle without getting injured.”

The findings are ready to be peer reviewed, with a draft of findings expected to be ready within a month. The perfect outcome would be that for each match a TMO equivalent could look at impacts and use the technology to instantly tell whether a concussive impact has occurred or not. In tandem with the blood markers and the other battery of neurological tests there is excitement about bringing the lab to the pitch.

“Leinster is very supportive of the research,” says Wilson. “They have been so invested in making sure this happens. Every time the players give blood it’s a favour because there is no immediate benefit to them. It’s unusual for athletes, because they are usually being pulled in all directions by different people, to be so helpful.”

The research is being funded from America by the NFL’s Head Health Challenge, a fund for the development of new materials and technologies that can detect early-stage mild traumatic brain injuries and improve brain protection. As collaborators, they are committing up to $20 million to a variety of projects.