Ireland take foot off the gas against Argentina 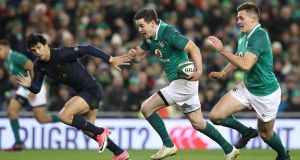 Job done. The final scoreline is more of a testimony to Argentina’s resilience and spirit, as well as qualities, but Ireland were always in relative control, leading from the fourth minute and always two scores clear for the last hour.

The most disappointing aspect for Joe Schmidt and especially Andy Farrell, after backing up the concession of just three points against South Africa with a highly disciplined first-half shutout here, was the concession of three second-half tries.

Interestingly, two of them came from neat grubbers in behind, something which a defence which employs fast line speed, can be vulnerable too.

But for the most part, on a Baltic evening in the Aviva Stadium, Ireland kept the Pumas at bay and kept the scoreboard ticking, thanks to the excellence at the basics, be it scrum, lineout or their trademark clearing out at the breakdown.

There were also a couple of well worked tries for Jacob Stockdale, who must think this whole test match lark is a doddle. Two more tries here took his tally to three in two home tests, and four in four.

He certainly has an eye for a gap and is a good reader of the game, to go with his rangy running and strength, but there other equally valid, if not more so, contenders for man of the match. Tadhg Furlong had a storming match, as did Rob Kearney, who was at his belligerent hard-running best with 13 carries, for 87 metres, including two line breaks and five defenders beaten. This was a statement performance. CJ Stander chipped in with 20 carries.

Chris Farrell defended that demanding outside centre channel very effectively and showed some nice touches as well as carrying hard. Not much came Adam Byrne’s way, but he acquitted himself well, even when playing the last quarter in midfield after Farrell departed with what looked like an injury to his right leg. James Ryan added athleticism and ballast, not least to the scrums, before being forced off with what seemed like a bang to the head.

In what looked like a particularly exhausting test of fitness levels, which was officiated superbly by Mathieu Raynal and his team, Ireland’s gameplan clearly revolved around a desire to run Argentina off their feet. Conor Murray’s box kicks were a last resort, and tellingly Johnny Sexton kicked only seven times, passing 26 times and carrying four times.

Sexton didn’t look quite right physically from the off, and a couple of big hits after delayed passes, notably by the hard-tackling flanker Marcos Kremer, left him requiring treatment, but he soldiered on until the 75th minute, always putting his body on the line.

Aside from his two try-scoring passes to Stockdale, he also landed five from six, taking his count to 31 from his last 33 kicks for Ireland. He really is a gem.

Ireland set out their stall and set the tempo from the off, when keeping the ball in hand from the deep kickoff by Nicolas Sanchez and applying width from inside their own 22. Farrell, and especially Kearney, as well as Furlong all made big carries and as pleasing for Schmidt would have been the clearing out. For example, when Kearney looked isolated, Adam Byrne’s first involvement was to come in and effectively make a one-man clear-out. 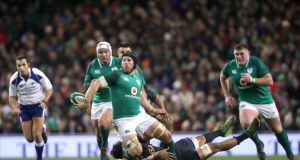 After another strong carry, this time by Best, two Argentinians were adjudged to have gone off their feet, and Sexton opened the scoring.

When Ireland went to the corner, Bundee Aki trucked up lineout ball well over the gain line, and from the ruck, in a pre-planned move, Murray kicked into the space which Emiliano Boffelli left, the winger then slipping in his moment of panic, but the ball wickedly bounced high beyond even Byrne’s reach.

The Los Pumas scrum was heavily punished by Raynal, whom Warren Gatland for one regards as the best scrum referee in the game, when they were beaten at home in the Rugby Championship by Australia. When the Irish scrum stayed with a concerto push to shove the Pumas off their own put-in, they were rewarded with a second Sexton three-pointer.

The rustiness in the hastily assembled midfield combination of Aki and Chris Farrell manifested in the former’s pass behind the latter being knocked on, although Martin Landajo was pinged for a crooked put-in anyway.

But both centres were at the heart of Ireland’s superbly worked opening try. From a solid scrum near the left touchline, Aki feinted to give a wrap pass before trucking it up over the gain line again and when Farrell took Murray’s pass off the recycle, he attacked the inside shoulder, drawing in Pablo Matera and Santiago Gonzalez Iglesias before deftly pulling the ball back for Sexton to go through the ensuing gap. He also had Stockdale running a classic, Tommy Bowe-type trailer on his inside shoulder to convert a two-on-one with Tuculet into a try for the young winger which Sexton converted.

Argentina have shown an ability to retain possession for lengthy stretches, and one exhausting 18-phase attack in and around the home 22 saw the well-drilled Irish defence keep its shape with immense discipline.

They counter-rucked for a rate turnover at the breakdown against Ireland nearing half-time, before the half ended with Sexton’s pass inside to O’Brien being judged forward, although more worryingly he was left flattened again by another big hit from Kremer.

As the temperatures continued to drop, upon the resumption it was striking how many empty seats there were, particularly those in the middle tier where there was the option of glassed-in boxes.

In any event, many thus missed Stockdale’s second try, or saw it on the screens inside the stadium. Kearney again ran the ball with utter conviction, steaming into contact, before both Stander, yet again, and Farrell carried well, whereupon Stockdale came in off his wing to take Sexton’s flat pass and outstrip the cover to score.

Back the Pumas came though, Monsieur Raynal issuing Best with a warning after the concession of three penalties in quick succession at the breakdown - after a first-half without one penalty against the home team.

With Raynal playing another advantage, Sanchez grubbered through and Tuculet, who looked fractionally ahead of the ball, pounced for the try. Sanchez converted to make it 20-7.

On top of losing James Ryan, replaced by Devin Toner, Ireland were then forced to play the final quarter without Farrell, whose impressive outing was curtailed with a leg injury. This forced an already depleted Irish midfield into another new combination, as Andrew Conway came on at right wing and Byrne went in to outside centre alongside Aki.

When Matera was penalised for getting back to his feet without releasing the ball, a second, somewhat harsh penalty was then kicked to the corner by Sexton. Toner rose highest, as he does, and transferred the ball in mid-air to Iain Henderson. After the maul rumbled forward, Stander broke off to plough through the tackles of Jeronimo de la Fuente and Sanchez.

This sparked a brawl, and an amusing rebuttal of an unofficial ‘appeal’ by Sanchez, taking over the captaincy from the departed Creevy. “We cannot check everything in rugby. If there is something clear and obvious, the TMO will tell me.” Sexton’s conversion hit the upright.

Argentina fought back again and outflanked the Irish defence with a long floated pass by Tuculet to Leguizamon, who withstood Kearney’s hit to score by the corner flag. Sanchez couldn’t land the touchline conversion, as Sexton received yet more treatment.

But he was on his feet again to nail an insurance penalty, before the Pumas’ young replacement, Sebastian Cancelliere, broke out from under his own posts and offloaded infield to fellow winger Moyano, who made a wonderful 70 metre gallop, beating Conway, before eventually being collared by Kearney.

Moyano and Argentina were not to be denied another consolation try, the winger latching onto a deft grubber by Gonzalo Bertranou to score in the corner, and Sanchez ended the match with the touchline conversion.