Opportunity knocks and the Lions are ready to answer 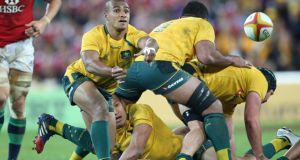 Will Genia: will likely play a pivotal role against the Lions. Photograph: Billy Stickland/Inpho

When Brian O’Driscoll addressed the Lions squad yesterday, reflecting back on how an opportunity knocked and passed by at this exact point a dozen years ago and hasn’t come calling since, it apparently made the hairs on the back of Rob Howley’s neck stand up. Come kick-off in the din of the enclosed Etihad Stadium, and 53,359 people will share that same feeling.

Many are called, but few are chosen. For O’Driscoll, and every Lion since, the imprimatur of a Test series win has eluded them all. The great man, and others of today’s Lions, will never have this opportunity again, at least not after next week. Ditto the proud Wallabies, who would have to wait 12 years for vengeance.

There must be a danger of the Lions’ being distracted by the prize at hand. As Howley put it, “if you dare to dream it turns into a nightmare”. And so intent are the Lions to seize the moment in this pivotal and potentially decisive Test that if they don’t do so the pendulum will assuredly have swung toward Australia.

There are also some unnerving historical auguries. In both of the last two series in Australia, the side which lost the first Test came back to win the series; the Lions in 1989 and Australia in 2001, when the Wallabies regrouped and rebounded from losing in Brisbane to beat the Lions 35-14 in the tourists’ first Test in what is now the Etihad Stadium and was then the Colonial Stadium.

‘Right areas’
Back-to-back Heineken Cup pool matches can alter dramatically from week to week, and as Howley observed, this second Test could well pull a few rabbits out of the hat.

“It’s just being accurate and keeping pressure on Australia in the right areas, and if we can do that hopefully we’ll come out on the favourable side of that scoreboard but I’m sure the nature of the game on Saturday is that you go for broke. It’s do or die, and I think that we feel we’re in a good place and we can play some rugby,” he said.

There are, admittedly, some differences from ‘01. James Horwill and Will Genia are akin to John Eales and George Gregan, but aren’t accompanied by seasoned World Cup winners. Genia’s influence in the first Test, admittedly, was even more pronounced than Gregan a dozen years ago, when he grew into the series and began running freely in the second and third tests.

Clearly, in choosing Dan Lydiate above Tom Croft and Ben Youngs, with both Seán O’Brien and Conor Murray (both of whom helped curtail Genia in Eden Park in tandem with Jamie Healsip and Sean O’Brien) in reserve, the Lions are better equipped to improve their line speed and somehow seek to curtail the little genius. But it’s one thing trying, another doing.

Down to their fourth-choice loosehead in Mako Vunipola, who even when the first two went home was still chosen as an impact replacement, and their chief enforcer-cum-rallying point in Paul Connell, it’s hard to envisage the Lions’ set-pieces being as potent.

‘Unstructured rugby’
As a rugby fan you’ve got to love their brand of heads-up, relatively unstructured rugby, the way Genia can tap and go, and create a try from 90 metres. And as he showed when introduced last week, Kurtley Beale offers a completely different dimension from Berrick Barnes as a counter-attacker. Picture him linking with the freakish Israel Folau, and you know that, fighting for their lives, they’ll have a go.

With Beale and Christian Leali’ifano as alternate playmakers to James O’Connor, this might contrive to reduce the undoubted advantage the Lions possess in the number 10 head-to-head, as Jonny Sexton is a gifted, complete outhalf at the peak of his powers.

In the critical area of goal-kicking too, the Lions hold an undoubted edge with Leigh Halfpenny, and Sexton as back-up, even if it shouldn’t be anything like last week with the composed Leali’ifano as dedicated kicker. Still, like this Wallabies’ team, he is unproven. Not so this pride of Lions, and Lydiate closing down Genia could be the key.

It’s a fiendishly difficult one to call. The Wallabies might be anything. Not so the Lions. The hand of history and all that. This will be a ripper alright. You just know it. It just can’t be anything else.