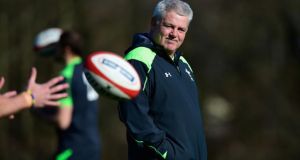 The Wales head coach Warren Gatland has turned to the Premiership as he starts preparing in earnest for the World Cup. His training squad of 47 for the tournament includes three uncapped forwards who have all enjoyed a successful season in England.

The Bath second row Dominic Day, the Gloucester back rower Ross Moriarty, a current member of the England Under-20 squad whose father, Paul, was capped by Wales, and the Exeter tight-head prop Tomas Francis have been included as Gatland looks to increase his strength in depth.

Francis was invited to train with Wales during the Six Nations and tight-head is a position concerning Wales with Samson Lee recovering from surgery on his achilles tendon. Gatland hopes he will be back by the first of three warm-up matches in August, but with Adam Jones having retired from international rugby, he needs to look at his options.

The squad, which continues to be captained by Sam Warburton, contains all 12 players who have signed national dual contracts, but 13 of the 47 earn their livings outside the country, including the outside-halves James Hook and Matthew Morgan, who have been recalled, along with the Exeter wing Tom James.

The players will meet up on 15 June following individually tailored rest periods and will have three training camps, the first in Switzerland, the second in Doha and the third in Poland. The first warm-up match is against Ireland on 8 August with the return in Dublin three weeks later. The 31-strong squad for the World Cup will then be announced before the friendly against Italy on 5 September.

“The coaching team is extremely happy with the blend of the squad which has experience and young talent,” said Gatland. “The easy part for the players has been done in terms of being selected, the hard work will begin from day one with a huge schedule of ahead of them.

“The players will face a tough couple of months of intensive training. We will be taking them to Switzerland, Qatar and Poland and I can assure everyone they are no holiday camps. We put a lot of emphasis on conditioning and preparation in 2011 which worked well for us and we are looking to step that up again this time. All 47 players have an opportunity to make the 31 and we believe the longer we are together the better we perform.”