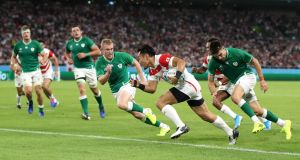 Kenki Fukuoka of Japan runs in to o score his side’s first try during the Rugby World Cup Group A game against Ireland at the Ecopa stadium in Shizuoka. Photograph: Cameron Spencer/Getty Images

Cripes. Did we ever imagine that the high point of the second half would be that moment when “signal loss detected” popped up on the screen? And the lowest point being when it was restored? After 22 minutes it was 12-3 for our lads, come full-time it was 19-12 for Japan. Or, as Donal Lenihan put it, “little Japan!”

Tommy Bowe asked the question that was on the nation’s minds: “What just happened?” (Although the nation possibly inserted an obscenity).

Nobody could really explain. And certainly nobody had seen anything remotely like it coming. Indeed, a decidedly bubbly Stephen Ferris had talked pre-match about how the whole country was buzzing after the Scotland game, including his taxi driver who could chat about nothing other than the Irish team. You’d be guessing after the morning that was in it, Stephen took the bus home.

In or around two hours later, Daire: “Do we get behind Japan now?”

Donal Lenihan had tried to warn us that the humidity might have a bearing on the proceedings, noting that the Irish players were sweating buckets in the warm-up, but for Japan it “was like a cold winter’s day”. Still, though, you sensed this would mean we might only win by 20-ish points, taking it steady in the closing stages to conserve energy for that quarter-final with South Africa.

Back in the RTÉ studio, the panel was discussing Japanese food of which Tadhg Furlong had revealed himself to be a big fan.

“I’ve been lashing in to the dumplings, the tempura prawns are excellent, and I’m a big fan of the ramen,” he’d told Hugh Cahill. “That went over my head,” confessed Eddie O’Sullivan, “I don’t know what ramen’s about.” Daire explained to him that it was “curry chips for millennials”, while Stephen offered to take him to Wagamama for lunch. “What’s Waga . . . I’m even lost on that one,” said Eddie.

“Tadhg,” he said, “is a typical country lad, farming background, he doesn’t get too flustered by anything. Listening to him there, you’d think he’d just come from cutting a bit of silage . . . so, to hear him talking about Japanese food . . .”

Any way, match time, and those first 22 minutes were grand. But a little bit ominously, it was only 12-9 at the break. Eddie, though, reassured us. “We are in a good space, the thing is not to panic,” he said. Jamie Heaslip agreed (no, seriously).

When Japan got their try, though, it was time to panic. “THERE’S 15 MINUTES ON THE CLOCK, YOU NEED COOL HEADS,” Donal howled, kind of losing his own, but by then the telly director was treating us to slo-mo replays of bewildered Irish players shaking their heads. It was turning in to one of them World Cup days.

But Ireland were pressing hard, so there was no need to surrender all hope. At which point a replay appeared on our screens concealing from us a Japanese interception, the live pictures returning just in time to see the Fukuoka lad heading like a Bullet train up the other end of the field. Keith Earls saved us, but there ended all hope of the headline ‘Shizuoka Shocker’ not appearing in three quarters of our Sunday papers.

Our balloon, Daire told us, wasn’t quite burst, but “it’s barely airborne”, his panel all sporting faces of the ashen kind. “We’re looking at an All Blacks quarter-final . . . if we’re lucky.” Jamie’s gulp could have been heard in Shizuoka.

Eddie manfully resisted reminding his panel-mates that he had told them from day one that Ireland’s name wasn’t already written on the World Cup, but both Jamie and Stephen insisted on not being too downbeat about it all, opting for giving Japan all the credit rather than inserting the boot in the Irish performance, or, indeed, the coach.

“Positive stuff is not particularly credible,” said Daire, but Stephen wouldn’t be swayed. “It’s not the end of the world,” he said, but Daire reckoned it was close enough. And all the while you could only imagine a man called George sitting at home throwing his biro at the telly.

“Without shooting people, where did it go wrong,” asked Daire, much of the blame placed on the humidity and Japan being Energizer bunnies who were mad up for it.

Daire, though, suggested the team would be “absolutely slaughtered” in the next few days, but Jamie took that as a positive too. “I think it’s the best thing for them because they’ve got to get back on that horse straight away, there are no ifs, buts or maybes.”

Mind you, that horse felt like Buckaroo! in Shizuoka, and over on Eir Peter Stringer had a notion remounting it wouldn’t be easy if the team had another day as poor.

“Completely bullied in terms of physicality, outplayed in every aspect of the game . . . they looked devoid of ideas,” he sighed.

As Stephen and Eddie headed for Wagamama on the bus, all they could hope was that Ireland’s signal would be restored in time for Russia.