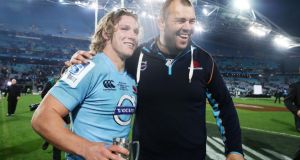 Former Leinster and current New South Wales Waratahs coach Michael Cheika has agreed in principle to replace Ewen McKenzie in charge of the Australia team, Cheika confirming that he had been offered the position.

Having led the Waratahs to the Super Rugby title last season, completing a unique coaching double after he guided Leinster to a Heineken Cup triumph in 2009, Cheika was the obvious choice.

He confirmed the offer to the Australian media when he spoke to the Sydney Morning Herald newspaper out the front of Waratahs headquarters at Moore Park. “It’s a pretty humbling experience to be asked to be involved in something like that, but we’ll see what happens.

“There are a few things to be ironed out, obviously the logistics, etc ... everything is so close. So we will see how it goes and work it out from there.”

Asked if he was excited about the opportunity, he said: “Who wouldn’t be excited in coaching [THE WALLABIES].”

Asked if it can happen before Friday when the team flies to Europe for its spring tour, Cheika said: “We’ll see how it happens.”

The strength of the Waratahs’ say in any deal between him and the Australian Rugby Union has grown markedly.

Cheika still has one year to serve on his contract as Waratahs coach, so no agreement between the ARU and Cheika could be reached without the Waratahs approval – and on his and their full terms.

With four days until the Wallabies fly out for their five-game tour, it is hard to imagine any discussion would not have something to do with pressing ARU matters. And for the ARU there is a mountain of those.

They include appointing and naming a new coach and the new management structure Bill Pulver said would be created before McKenzie resigned, approving and naming the Wallabies touring party initially scheduled for tomorrow, booking confirmed flights, and fine tuning arrangements for what is supposed to be a Wallabies celebration – the John Eales Medal dinner.

“I had a long chat with Bill about a number of things. I am not going to repeat what they were about,” Allen said. “All I will say is, if that were to eventuate with Michael Cheika [asked to coach the Wallabies], that’s the position of the Waratahs board.”

Asked what the Waratahs board position is, Allen said it remained as Waratahs chairman Roger Davis expressed last week. “We would want him to coach us next season, so we are willing to work with the ARU on the solution and wouldn’t stop him obviously,” Allen said.

“I know Roger said we would definitely support him in advancing his career. There is no doubt about it.”

Meanwhile, Allen said any loss of Cheika’s services to the Waratahs would only compound an already challenging number of issues they have to resolve before the 2015 season.

Firstly, if Cheika left, there would be the cost factor of a global search the Waratahs would have to execute to try and find the right person, at a time when there is not a flood of top available coaches.

During that search, the Waratahs would then have to appoint an interim coach from one of their two assistants, in former Crusaders assistant and All Black Daryl Gibson or former Wallaby Nathan Grey.

Allen was confident the ARU would recognise the Waratahs’ issues and work with them to find the best solution for all parties.

Other candidates mooted in local media before the news that Cheika was offered the job were Australia’s World Cup-winning former flyhalf Stephen Larkham, who is coach of ACT Brumbies, and Melbourne Rebels and former Munster coach Tony McGahan.