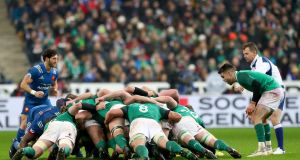 The consistently high performance of the Irish scrum has been a revelation. Photograph: James Crombie/Inpho

There are many eternal truths in rugby.

The first is that ‘forwards win matches, backs decide by how much’.

While Jonny Sexton’s Parisian drop goal is now forever lodged in the Irish rugby Pantheon, the opportunity for his kick would never have occurred without the determined and technically perfect forward play. It was Iain Henderson’s catch from the 22-metre drop out and the pack’s bloody-minded carrying of the ball 40 metres up field that put Sexton in position for his kick.

It was the same for Scotland in their magnificent victory over England. Huw Jones and Finn Russell starred, but it was the Scottish forwards, inspired by John Barclay, who showed more passion and fight than the more vaunted English pack.

In the opening three rounds of this Six Nations, Ireland’s forwards have been highly effective. If Ireland are as efficient today, they can bully the Scottish forwards into submission.

But that won’t be easy.

Against England, Scotland targeted the breakdown. The Scottish identified that England were sending just one supporting player to clean out and secure possession. The Scots did some simple maths. England are sending one, we will send three. And that was the foundation of their famous victory, the second and third Scottish defenders tearing England asunder at the break down.

Unlike England, Ireland send three supporting players with the ball carrier to most rucks. John Barclay and his pack will not have it as easy as they did against England.

These stats tell us that Ireland are technically excellent in possession and capable of holding the ball for multiple phases.

Rugby is rich in symbolism. The ancients designed the ball to be the symbol of power. He who holds the ball, owns the game.

Ireland’s domination of possession tells another of rugby’s eternal truths. Forwards win games, because to win games, teams must dominate possession and that starts at set play.

In the last round, Wales tried to ram this truth down Irish throats. With two minutes 40 seconds left on the clock, and trailing by ten points, Gareth Anscombe kicked a low, short restart for Steff Evans to outjump the much taller Irish forwards and win possession.

Wales knew the mantra. Win the set piece, maintain the ball, be patient, rely on your attacking systems and we can score. And they did. Fittingly, Evans completed the brilliant movement with an excellent try. Game on.

Despite the Irish domination at set play all match, one poorly executed restart and 80 minutes of hard work can be undone. Wales had the ball and with it, the power.

The consistently high performance of the Irish scrum has been a revelation.

For this, I must give the law makers and referees a huge pat on the back. Forcing the hooker the strike for the ball, referees choosing not to turn a blind eye to cheating in the front row, means the ball is now coming out of the scrum and getting to the backs. For more than a decade that did not happen.

As long as the ball gets to the feet of the number eight, the referees are telling the scrum half to “use it”. (Or as the wonderful Nigel Owens MBE says, “Ewwws it.” Love your work Nig!)

Now the ball is being liberated from the scrum as the game designed it should be. In the recent past, because of poor law making and unsympathetic refereeing interpretations, two generations of backs have been robbed of understanding how to attack from quality scrum ball.

Both sets of backs in today’s match are guilty of running across field and not understanding how to create space from scrum ball.

A midfield scrum, 40 metres out is a time for backs to get excited. Sixteen men are tied up in the scum and the defending fullback is deep. It’s overlap central.

The quality of the Irish scrum is so good that it can now produce channel one ball. Channel one ball is when the ball comes back, lightning fast, through the legs of the loose head prop, to arrive between the left flanker and the number eight. It is the best attacking ball in the game.

In the last decade the only place you could find channel one ball was in the Natural History Museum, in the glass case next to the long gone Giant Irish Red Deer.

Now, like a terrible attacking creature from Jurassic Park, its DNA has been brought back to life.

If only the backs and coaches knew how to exploit it. My only criticism of Conor Murray, who is one of the best scrumhalves I have seen, is that he is far too slow in passing channel one ball out of the scrum. On midfield scrums, the backs to his left have an overlap on every scrum.

There are acres of space to attack against Scotland and it must be said, it is the same for the Scots against Ireland.

It will be a joy to watch a resurgent Scotland and a powerful Irish team play dramatic, attacking rugby. The pack that dominates will be victorious.

It should be Ireland, but underestimate Scotland at your peril.

Who knows, we may even witness a championship victory.