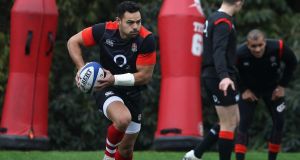 Talk of revolutions and guillotines is always tempting when a teamsheet is significantly rejigged on the eve of a big game in Paris. A new captain, a new starting hooker, fresh faces at full-back, centre and on the bench? Leaving aside the calf injury that has sidelined England’s regular leader Dylan Hartley, this is as close as Eddie Jones has strayed to radical change since he took over.

In theory it is for one weekend only, designed specifically to introduce a little bit of extra oomph to a side who underperformed at Murrayfield. But is it really? To those lucky enough to be in New Zealand last summer it bears more than a passing resemblance to the Lions Test side which held the All Blacks to a series draw. Owen Farrell, Jamie George, Anthony Watson, Ben Te’o and Elliot Daly already know what a seriously important Test feels like. It is almost as if a sleepless Jones has been up at 4am rewatching the Lions official video.

Playing catch-up has never been the Australian’s favourite pastime but, clearly, he is prepared to go back to the future and borrow from Warren Gatland’s playbook if the situation demands it. Plenty of former internationals had predicted England would simply invite their established senior pros to right the wrongs of Edinburgh; they underestimated Jones’s desire to pierce the gloomy Scotch mist and follow through on his ominous threat that “no one is indispensable”.

There might have been more casualties had Sam Underhill’s latest untimelytoe injury not ruled out the Bath flanker for the rest of the season. As it is, the same back row that finished a distant second-best at the breakdown in Scotland will feature again, fully aware Jones will not tolerate a repeat. France are likely to pose a slightly different threat in that area but, equally, will have been quietly encouraged by the Murrayfield video.

So the ball is in England’s court, particularly for players such as George and Te’o, who have had to wait patiently for their opportunities. As Test Lions unable to command a regular starting place for England, now is their moment to convince Jones that “phase two” of his mission to steer England to 2019 World Cup success should involve a reshaped cast.

If George throws a slippery ball unerringly and England’s forwards propel the team to a convincing victory, what price Hartley regaining the No 2 jersey against Ireland even if he is fit? It is a similar scenario for Mike Brown at full-back if England’s jet-propelled back three of Watson, Daly and Jonny May leave the French defence floundering in the wet.

Of course, this is tough on Hartley and Brown, season ticket holders during England’s Six Nations title successes of the past two seasons. Who would you theoretically want standing under a swirling high ball in a rain-lashed Parisian madhouse more than the rock-like Brown? But that is modern sport: teams which do little more than stand still invariably go backwards. It would be no huge surprise if this XV prove closer to Jones’s World Cup side next year than the one which trotted out in Edinburgh.

With Billy Vunipola, Jack Nowell, Ben Youngs, Henry Slade, Underhill and perhaps even Manu Tuilagi also back in the mix, there is increasingly little cause for Jones to tolerate mediocrity, not that he is inclined to anyway. Te’o should probably have started against Wales; his angles of running keep defenders honest and big matches do not remotely bother him. With George Ford still at 10 and Brown gone, England badly need someone to make a dent or two.

Will it all click under Farrell’s no-nonsense northern tutelage? Given the dodgy weather forecast there was also an argument for utilising the tactical kicking game of another Saracens player, Richard Wigglesworth, at 9 from the start. Ultimately, though, England do not particularly want to be dragged into a tortoise-slow grinding game which might permit Les Bleus the chance to suffocate their visitors at source and kick a load of penalties. Instead Jones wants the big French forwards to be wheezing from the outset and the home back three to be making poor decisions in their own 22 under severe pressure from their fleet-footed opposite numbers.

Coincidentally or not, all of the above would also come in handy in Japan in 18 months. Hartley and Brown may well make the World Cup squad but the comforting solidity they offer is only part of the equation if England are truly to rule the world. Not that Jones is yet publicly acknowledging as much: “It’s more about winning this game. We’ve always wanted to come up with different combinations.”

Above all else, the management want a team which grabs France by the throat immediately and replacements – Kyle Sinckler, Sam Simmonds, James Haskell – with loads of energy.

France have made only one alteration to their starting XV, with the previously exiled François Trinh-Duc back at 10, and can be relied upon to come hard early on. “We’ve tried to change the mindset of the players … we didn’t get the mindset right for the last game,” admitted Jones. Vive la difference? We shall see.