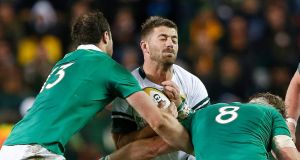 When CJ Stander was harshly and controversially given a red card in the 22nd minute of the first Test in Newlands Stadium, every rugby fan around the world thought Ireland were finished.

Just before half-time when Robbie Henshaw was correctly shown a yellow card for a dangerous tackle, even the zealots of Irish rugby must have doubted.

It did not matter what everyone else was thinking, what mattered was what the players on the ground were thinking and their minds were full of determination and resilience.

Ireland did not win the game during that incredible period when they had only 13 men defending their line, against 15 marauding Springboks. But crucially, at a time when South Africa should have scored Ireland held tight and did not lose the game. The Irish players’ emotional commitment in that period before half-time was astonishing.

Conor Murray, Iain Henderson, Rory Best and Jamie Heaslip all made incredible tackles metres from their own try line with only seconds left before half-time. If South Africa had scored – and they should have scored – the game was gone. Paddy Jackson, perhaps the smallest player on the field, hurled himself into the last two South African attackers forcing both JP Pietersen and Francois Louw into touch.

Jackson did not tackle them in the classic sense. He threw his heart at them and the small man’s body collided with more impact and destruction than a man twice his size.

In my experience, I have found that bravery is contagious. You catch it from your team-mates and the best environment to be infected with bravery is when your team is defending.

While the Irish set plays were excellent, against a team that is devoted to its scrum and lineout, at the kernel of this wonderful Irish victory was the brave defensive effort from every man in a green jersey.

Ireland’s blistering line speed frustrated the South Africans from the beginning. Every tackler then made a mess of the breakdown slowing the Africans’ recycle and adding to their frustration.

The Irish ‘control defensive system’ – that is, when the attackers have more numbers than the defenders – was faultless. The defensive line drifted in perfect unison and the collisions from those in green shirts were powerful.

And essentially, Joe Schmidt got his selections absolutely spot on. Luke Marshall and Rob Henshaw were superb as a centre pairing, and Jared Payne has proven true what I have been stating for two years. Jared is not an outside centre, but he is an excellent fullback. He was close to the ‘best on field’ for Ireland. With more time and space at fullback than in the centres, his injection of real pace and excellent offloading – that crucially led to Murray’s try – were superb.

The pack deserves massive praise. To a man they were technically excellent and aggressive and, to this old school rugby man, their mauling was a thing of beauty. The tenacious scrummaging from Ireland, a man down for 60 minutes, was heroic, with the front row a collective colossus.

Henderson, Devon Toner, Jordi Murphy and Heaslip set an astonishing work rate. Instead of being daunted by losing CJ Stander, they were inspired, and Heaslip had his best game in several seasons.

A noticeably fitter and lighter looking Henderson is forming a powerful secondrow partnership with Toner. Before the match very few observers would have predicted that Eben Etzebeth and Lood De Jager would be outplayed.

While the defence won the game, the thinking behind the Irish attacking systems displayed signs of a much-needed change from the Six Nations. The short side was used much more frequently and with great effect. Jackson’s short kicking game proved decisive and Ireland attacked out wide with great success, rather than having forwards hit in close, which has proved so ineffective in the past.

Scoring 26 points against South Africa despite being two men down at times takes some excellent thinking and execution.

The South Africans were poor and it seemed they thought it was only a matter of time before Ireland cracked.Their replacements were below international standard and performed poorly. We can only speculate if outside political pressure is influencing Springbok selection.

This was a win to cherish. Passion, excellence, courage and skill were on display in abundance. The entire group, players and staff, deserve great credit. To win in South Africa against the Springboks is one of rugby’s most daunting challenges.

Next week is already looming large, with the match in the oxygen-depleted air of the highveld. Taking on South Africa at Ellis Park is second only to playing New Zealand at Eden Park in terms of impossibility.

But as Muhammad Ali said, and the Irish rugby team just proved, “Impossible is nothing.”