Matt Williams: Australians approach the game with a different mindset 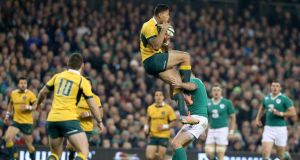 “Ireland played great footy and deserved to win (last November), but the kicking was way too much. That’s not how we play. The mindset is a massive difference.”

The Six Nations is the pinnacle of European international rugby. The greats of the game, leapt to the world’s attention through their actions in the championship.

Up until the advent of professionalism, the Six Nations was the premier international competition and Europe was the epicentre of world rugby. Teams from the south had to win in the north before they could proclaim their greatness.

But the rugby world has changed. How is the Six Nations championship currently regarded in the Southern Hemisphere?

Three Australian rugby men, whose combined lives span the generations from World War II to the present day, help shine a light on the relevance of the Six Nations to those Down Under.

He was a major player in overcoming the huge opposition from the Northern Hemisphere unions in establishing the concept of a Rugby World Cup in 1987. He was also a major behind-the-scenes operator in the recruitment of players to the “rebel” ranks in the 1995 rugby war. This forced the death of amateurism and the establishment of professional rugby. Still razor sharp, Turnbull is forthright in his views.

“Six Nations rugby is played with far more overt passion than it is in the south. We could learn a thing or two from that. That aside, I don’t think the Six Nations have actually done anything that is groundbreaking in terms of rugby development and how the game is played. What they are doing is the basics with far more consistency and skill, which is translating into a genuine closing of the gap between the Northern and Southern Hemispheres.

“Six Nations teams are good at winning the ball and maintaining the ball, but teams like England have never been much good at using the ball.

“What has changed is that Six Nations rugby is heavily populated with exiled Southern Hemisphere talent. Ireland have coach Joe Schmidt, Jared Payne and, Rodney Ah You. Wales have Warren Gatland and Gareth Anscombe. Scotland have coach Vern Cotter, Sean Maitland and Grayson Hart from New Zealand. Dave Denton is Zimbabwean. Josh Strauss, a South African, will qualify for Scotland in September. England have much greater numbers of New Zealanders, Samoans, Tongans, and South Africans in their set- up. France and Italy have several foreign-born players also.”

Turnbull poses the question; if the Six Nations is so strong why are so few indigenous coaches involved? While there have always been foreign-born imports in the Six Nations, the numbers continue to increase.

“The Six Nations and the Four Nations in the Southern Hemisphere are obsolete. They should both be incorporated into a 10-team home and away World Championship. This would be played over a 12-month window. There would be a moratorium on the competition during the RWC years.”

“The Irish team are now a serious power in world rugby. Over the past decade they have raised their fitness and skill levels to a point where they have twice won the Six Nations tournament, and twice came within a whisker of defeating one the greatest All Blacks sides of all time.”

Chris Thompson is a former professional player with the Waratahs and the Melbourne Rebels. I coached Chris when he was playing in the second row for Racing Club Narbonne in France. He was an excellent tactician and a deep thinker about the game. He has recently retired and is now the assistant manager for the Tony McGahan coached Melbourne Rebels in Super Rugby.

“The big issue for the Six Nations from an Australian perspective is that it’s very hard to watch it. It not on free-to-air TV and every year it’s on a different cable channel. If you don’t have cable you don’t see it. Even if you do have cable, you have to chase it down.”

“Having played in Europe I understand the passion for the event, but the average rugby guy in Oz does not get that. Rugby has different paradigm in Europe. They think about rugby in a different way and they play a different way. Lots of rugby people here just don’t get it.”

Australians are always puzzled why Northern Hemisphere supporters cheer and clap when the ball is kicked or a scrum penalty is awarded. Those exact actions received loud and strong yells of derision in Australia. Drop goals are always booed.

Thompson believes that the the centre of international rugby is closer to home.

“With New Zealand, South Africa and Australia holding the top three rankings in the IRB for so long (until Ireland nudged out Australia in November), it’s hard to look at the Six Nations as the best international rugby competition. It’s a massive physical battle. Teams kick a lot for field position but there is not a lot of innovation. Wales have been playing the same way, with the same people for so long. Everyone knows what they are going to do. The Irish lineout is always worth watching. That is innovative.”

Christian Lealiifano is a centre or outhalf and a current Wallaby. Lealiifano’s pathway to the national side is a well trodden one. Australian schools, Australian 7s, Brumbies Academy, then the Brumbies. He is the typical modern player, created and trained by the professional system.

When we spoke, Lealiifano had just finished a pre-season training session with the Brumbies in 35 degree heat. Lealiifano believes the very different climate is far from the only difference between the Six Nations and the Rugby Championship. The thought processes are different in the south.

“It’s the mindset. We are brought up on fast grounds and told to run the ball. Attack, attack, attack. If you kicked the ball you were dropped. Ireland played great footy and deserved to win (last November), but the kicking was way too much. That’s not how we play. The mindset is a massive difference.

So where is the real power base in world rugby?

“I think the power base of rugby is still in the south. In the 1990s the gap was huge but it is definitely being bridged by the north. I think the Super competition that is expanding into Argentina and Japan is so exciting. That is where the cutting edge of rugby thinking is. Especially the New Zealanders.

“The number of good Southern Hemisphere players playing in the European club competitions is helping the north. They bring a different way of thinking and have a massive influence on the local club game.”

The influence of players like Rocky Elsom, Ruan Pienaar and Matt Giteau emphasise his point. “I don’t see the Six Nations with that innovative mindset. Look how John Kirwan had the Barbarians play. They thought outside the box. It was great to see.”

For Australians, it seems the Six Nations requires more innovative and original thinking if it is to capture the imagination – and not just in the lineout. A stronger attacking mindset that sees teams running the ball more and kicking less. Maybe a few of the Six Nations teams would benefit from listening to “the Down Under” advice.