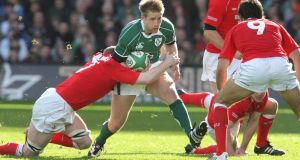 Luke Fitzgerad: suffered a litany of series injuries which curtailed the number of Test caps he won to 35, one more than his dad, Des. Photograph: Alan Betson

Luke Fitzgerald, lost to rugby at 28, was so rare a talent that Leinster signed him to a full professional contract straight from school.

Within six months the prodigy had become an Irish international. He became a Lion at 21.

Before all that, around the turn of this century, whispers came from the Blackrock grassroots about Des Fitzgerald’s boy. The Ireland prop from two World Cup campaigns had ironically produced a son gifted with a sensational array of attacking skills.

Of course many athletes seemingly destined for greatness succumb to broken limbs or snapped ligaments.

“We’re getting into the really important part of our careers where legacies are decided, and people will be making a call on what kind of player you were in the next four or five years,” Fitzgerald told The Irish Times last February.

He seemed more determined than ever but before that week was out another knee injury ruined another Six Nations for him.

Knees can be mended, as Ray Moran repeatedly proved. But Fitzgerald’s playing days were maimed by a third neck injury following a hardly crushing tackle from AJ MacGinty during the Pro 12 final last May.

That was enough for his career to become a cautionary lesson that, seemingly, has already been learned by Irish rugby.

Joe Schmidt overlooked Garry Ringrose for the South Africa tour this summer despite the 21-year-old nailing down the Leinster number 13 jersey.

James Ryan, Max Deegan and Andrew Porter were key figures in the Ireland under-20s journey to the Junior World Cup final this month, yet all three of them are only entering the Leinster Academy.

Eddie O’Sullivan initially agreed, capping him at centre alongside Brian O’Driscoll against the Pacific Islands for the last ever game at Lansdowne Road in November 2006. But his disrupted accumulation of international caps tells no lies. Heaslip, another who made his debut that day, has played 93 Test matches in stark contrast to Fitzgerald’s 35 (one more than dad Des).

The first major injury came against Australia at Croke Park in November 2009. The pain from a ruptured knee ligament was etched across the 22-year -old’s face.

He was already in the very select group of Grand Slam Irish men, he had a European winners medal, he was a Lion.

Fitzgerald subsequently conceded the unorthodox yet wonderful way he could step an isolated defender may have contributed to further injuries.

After a loss of confidence during the 2011 Six Nations, when badly exposed at fullback, Declan Kidney went with the more durable Fergus McFadden in his World Cup squad as disc problems interrupted Fitzgerald’s impressive form at inside centre for Schmidt’s Leinster.

Then another neck problem all but wiped out 2012 and with it went his national contract (Leinster intervened to keep him from joining Michael Cheika’s Stade Francais).

It is the resilience of the man that will be remembered. Having forced his way back into the Ireland squad in 2013, on will and talent more than anything else, a ruptured ACL, again in his left knee, during defeat to Italy in Rome made it seem like Fitzgerald was cursed.

“Because of all the trauma in my left leg, your body starts making allowances for it in different ways,” he explained. “I ended up having problems with my groin for about 10 months.”

Schmidt always rated Fitzgerald. Using him off the bench in the November 2013 defeat to New Zealand, he was unable to cap him again until the Six Nations title-clinching game at Murrayfield in 2015.

Injury to Robbie Henshaw saw him start the first World Cup match against Canada and he proved Ireland’s most explosive player in the quarter-final defeat to Argentina, all hinting at a circuitous route to the peak years he so dearly craved.

But further shredding of knee ligaments refused to allow his talent to breathe.

Another Six Nations slipped past as he positively assured us, on tentative entry into media commentary, that it was just a temporary setback, until another neck problem laid the harshest medical reality at any athlete’s feet.

Irish rugby seems to have learned the lesson from their second generation of rugby professionals at a viciously cruel cost that may not necessarily alter the damage caused by this most physically demanding of sports.

In time we shall learn if a similar lament as this one is to accompany the injury-ravaged careers of Cian Healy, Seán O’Brien and Peter O’Mahony.