Liam Toland: Joe Schmidt’s men can stop the All Blacks in their tracks 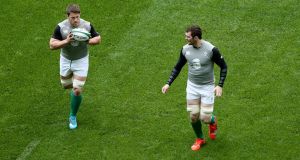 Seán O’Brien and Peter O’Mahony could have a big impact against the All Blacks if they are introduced from the bench. Photograph: Marcus Sheridan/Inpho

Oh Captain! My Captain! our fearful trip is done,

The ship has weather’d every rack, the prize we sought is won.

I’ve long been aware of Whitman. His poetry played an intrinsic role in Hollywood’s beautiful adaption of dementia in The Notebook, and then of course there was that famous scene from Dead Poet’s Society. In eight days we face the All Blacks and I wonder: can we win the prize sought?

Well, we have four Irish teams in Europe, three of whom currently lead their pool. One of those is Connacht, who have resigned Ultan Dillane and Bundee Aki. Also staying in these parts is the main man himself, Joe Schmidt.

Then the gods shone in Thomond Park last weekend, reminding us what is possible, or impossibly possible, especially when Munster scored that bonus-point try with only 14 men on the pitch. That it came off a scrum with the Munster number eight controlling at the base as the opposition was peddling backwards was especially poignant. Should they have ignored the referee and scrummed down once more?

It made me wonder about the wonderful culture of Irish rugby as I wonder now about Soldier Field eight days hence and the All Blacks.

Certainly Leinster are most similar to what Ireland will be like (and have 16 players in the squad). They will have been frustrated by their error count in Montpellier where many extremely hard-fought attacking positions were spoiled by spilled balls. Yes, conditions were tough but they will be frustrated. That they circled the wagons and continued battling Nemani Nadolo, as well as the conditions and themselves, is a testimony to their culture.

They rallied together to fell Nadolo, not unlike the way the Springboks felled the mighty Jonah Lomu in 1995.

Robbie Henshaw, in only his third game for Leinster, refused to quit as Nadolo bashed his way down the tram tracks; there he was, jumping on his back and steering him by the ears.

For all of Montpellier’s might, they epitomise the modern brand of French rugby that looked so horrible when Toulouse came to the Sportsground. They don’t have our quality gameplans and a team culture to keep going. And keep going is what all four provinces did at the weekend. New Zealanders are not French.

When you’re faced with such monster opposition, in such conditions, brains always give you a chance. The Irish teams certainly have this, as do Leinster whose gameplan looks very ambitious from deep; they expose available space when exiting from their own 22 but go narrow into a simple one-out passing attack the closer they get to the attacking zone.

Notice how their flamboyance from deep transitions into simple passing hard onto the gainline, to exploit the most marginal overlap – for an example of that, see their blindside scrum try against Munster.

This appears to be more Schmidt’s way than Pat Lam’s way. Is there a possible blend afoot? I doubt it.

What I definitely don’t doubt is Ireland’s ability to beat the All Blacks, halting them at 18 wins in a row. We have the culture, we have the coaches and we have the players.

So what of selection? Well, form is important but so too is the class of international caps. Getting not-quite-fit players in the match-day squad is possible when balancing this with the eight-man bench. The key question is the split in the bench. Six forwards to two backs will guarantee Seán O’Brien and Peter O’Mahony their places in the squad. Some weeks back I noted how O’Mahony’s brilliance over the ball was forcing key steals. O’Brien is also more than capable in this facet of the game, as he showed in Montpellier.

Stopping New Zealand playing in those championship minutes is crucial and what a brilliant pair to bring on fresh with 20 minutes to go. But why not start them?

Well, fitness will be an issue but so too bench impact as the All Blacks get their dander up as they did against Argentina. So Ireland need a strong finish to the game, which can be achieved with players who have less than an hour in them. CJ Stander, Jamie Heaslip and Josh Van der Flier to start, with the two aforementioned amigos to finish.

Further upfront, there’s tighthead. Who to start? Some weeks back I noted the performance of John Ryan, Munster’s tighthead, against Edinburgh (hardly New Zealand). That his scrummaging is beyond reproach is certainly true but, as I noted, his football brain and dancing feet in traffic were what caught my eye. He won’t start but he’s very close.

In midfield is Garry Ringrose. Watch not him but his team-mates when he’s on the ball. They look excited, as should we. Defensive systems are measured often by the missed tackle out wide but the work of the secondrows filling the pitch protects hugely.

Connacht have their system of zonal positioning in offence and defence. What system Andy Farrell selects remains to be seen but Ireland need lively secondrows and in that regard Iain Henderson’s fitness is crucial.

We’ve lost to the All Blacks all our lives but remember the words of Walt Whitman: “Nothing is ever really lost, or can be lost . . . the embers left from earlier fires, the light in the eye grown dim, shall duly flame again.”