Liam Toland: Ireland’s attack is the problem with our defence

Why are Ireland’s oppenents inflicting so much damage with just 33 per cent of the ball? 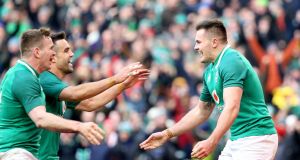 What is happening to our defence when we have the ball? It may take counterfactualisation or counterfactual theory of causation (bear with me!) to understand. For instance, what would have happened if Hillary Clinton had been elected president?

Or more pertinently, what would have happened had Gareth Anscombe’s pass landed in a Welsh hand and not Jacob Stockdale’s? Ireland have enjoyed 67 per cent of possession in their three opening matches and the results have been way too close in two. I was worried about Wales - now Scotland are a cause for concern. But for one wayward pass - brilliantly intercepted by Stockdale - the Welsh game could easily have swung wildly from its actual conclusion of a 37-27, five-try bonus point haul of five points to Wales’ zero.

But had Anscombe’s pass gone to hand then a 30-34 loss for Ireland could have followed with Wales getting the bonus point try for five points and Ireland having to settle for just two (a try bonus and losing by less than seven). It would have been an eight point swing in the standings. While in many ways that is almost irrelevant to elite sportsmen as they will always value the win, equally there is still no hiding place especially when the games is this close.

So with 67 per cent possession and 69 per cent territory in three matches, what could possibly have gone wrong? Much has been made of Andy Farrell’s defensive systems and the fact that tries are being leaked. That new players are bedding in is an obvious factor but what is the root cause of conceding seven tries in three matches against France, Italy and Wales?

Ireland have had, on average, almost twice as many lineouts as their opposition (39-21) so far in the Six Nations. Why? Ireland conceded almost half the penalties against the same opposition and by controlling the ball for such long periods, lineouts are less likely to occur. But although we made only 32 per cent of tackles we missed a far higher percentage than France, Italy and Wales. Why?

Outside of individual technique and defensive reads, there are two reasons for the tries we concede. Firstly, our style of attack or actions in possession and secondly the subsequent reaction of the opposition to the ball when they get it for a paltry 33 per cent of the time. How can they inflict so much damage from just 33 per cent possession and half of the lineouts?

A hugely significant part of the opposition’s impact is buried deep in the numbers. Ireland have carried the ball in the three matches for 1,425 metres with France, Italy and Wales managing a combined total of 930 metres. That’s considerably less, which is understandable if you’ve only 33 per cent of the possession. But when you look at metres per carry it’s striking that the numbers jump massively.

Both France and Wales made nearly twice as many metres from each of their carries than Ireland. Italy beat Ireland by 11 per cent. So metres carried by the opposition is linked to our 67 per cent possession stakes. What we are doing with the ball allows the opposition to consistently out-carry us. In a perverse way it’s not Andy Farrell’s fault at all! Especially when Ireland have conceded 38 turnovers to 33; that’s the attack. Our attacking rucking style is creating space in our defensive system.

I’ve long admired the rucking ability of non-traditional exponents such as Rob Kearney, who at fullback is phenomenal in his attitude and technique. Chris Farrell had a magnificent post-tackle technique where on felling the Welsh ball carrier he followed up by hoovering any chance of a Welsh recycle. There are buckets of examples of Keith Earls et al following suit for every one of those 198 carries (to 87 by France, Italy and Wales). But the fact that we create so many rucks - over twice as many as the opposition (412-201) - ties up these quality players for further attacking plays.

Those 412 rucks are eating up our creative resources and stymieing them defensively off turnovers. For instance, the starting Welsh front five carried a paltry 13 times making only two metres in total. Ireland’s starting front five carried 45 times, making 39 metres. So Ireland’s style clearly limits the opposition pack carrying, but at what cost to their defence given they have conceded 38 turnovers?

I noted on Monday the two tries that I valued most - Stockdale’s first (a scrum, three carries, superb hands from Johnny Sexton and walk in try) and Cian Healy’s off the two minute, exhausting scrum phase. That it was the exact same functionality is why I was so interested. Ireland went left off the scrum, carried three times and Stockdale scored off Sexton. The second was off a scrum going right; carrying three times before Healy barged over. Exactly the same, but with a difference - for the first Sexton pushed a beauty into space, for the second Healy barged over. This flexibility is hugely beneficial to Ireland’s attacking outcome. I do, however, wonder what spurred Sexton into floating that pass to Stockdale. Was it the missed penalty earlier? Who knows but it was a risky play that exposed space early.

And maybe here’s the pivot. Accept a reduction in possession stakes from 67 per cent towards 50 per cent and use the ball differently to open space and raise the metres per carry statistic, but crucially leave our transition off turnover into defence in a healthier and less vulnerable place. Conceding tries off 33 per cent possession is far too generous. Even Italy are getting way more from each carry than Ireland and that is counterfactual theory of causation!