Letter from NZ: Hansen a voice of reason as pot is stirred down under

Warren Gatland insists the Lions are focusing on themselves ahead of the series-deciding third Test match against New Zealand. Video: Reuters 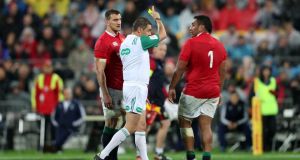 Pundits on New Zealand programme ‘Break Down’ sugggested Mako Vunipola should have been sent off duting the Lions’ win over the All Blacks in Wellington. Photograph: David Davies/PA

In the land of the blind, the one-eyed man is king. Except when there’s plenty more than one of them maybe. Recall, if you will, the manner the Irish media complained about what was perceived as the overtly physical approach of the All Blacks in their revenge mission at the Aviva Stadium last November.

For the most part, the New Zealand media took Sonny Bill Williams’ red card and four-week suspension on the chin, so to speak. But not Tuesday night’s weekly rugby magazine programme on Sky Sports NZ, the Break Down, hosted by former All Blacks great Jeff Wilson.

On this week’s panel with Wilson was another great All Blacks winger, John Kirwan, well-known television reporter and journalist Jim Kay and Nathan Rarere, who has had a long career in radio. Stuart Barnes was meant to attend, but was unwell, and all one can say is the balance he might have brought was at times sadly missed.

Kirwan maintained Williams’ red card was sufficient sanction, and that he didn’t deserve any ban. Kay, tongue-in-cheek, noted of the Williams’ disciplinary panel: “There was three Australians mate. That’s a definition of a kangaroo court.”

They also disagreed with the disciplinary hearing which decided to dismiss the citing against Sean O’Brien, with Kirwan maintaining that it was the same offence as that of SBW, and deserved the same punishment.

SBW’s shoulder connected with Anthony Watson flush in the jaw. O’Brien caught Naholo with his forearm, but it was not a straightened forearm, and his hand was open in an attempt to slap the ball.

They’re not remotely the same.

“Sonny Bill was reckless. Red card. Four weeks. O’Brien doesn’t get sent. But they go back and look at it. They didn’t even do that. So here’s my question. Four weeks?” said Kirwan.

Mako Vunipola, they all reckoned, also deserved a red card for diving onto a prone Beauden Barrett, as part of a general dispute with the lack of consistency in modern-day officiating. In the first Test, Joe Moody did almost exactly the same after being penalised for coming through early on Conor Murray and knocking him to the ground, and then, with the ball away from the prone Murray, dived on top of him.

Wilson disputed the decisive penalty against Charles Faumuina for tackling an airborne Kyle Sinckler. All the panel forcefully agreed. That was fair enough. But it added to all the moans and complaints. Rich or what?

In light of the All Blacks being kept tryless, Wilson raised the theory, also propogated in the NZ Herald, that the Lions were deliberately conceding penalties to deny the All Blacks any chance of scoring tries.

Rarere agreed, and ventured that “it was a smart thing to do.”

Kirwan made the point that had the All Blacks not been reduced to 14 men they would have kicked to the corner. “But that’s what they (the Lions) did, they break your rhythm up, and it’s frustrating.”

“You said that,” stressed Kirwan. “I didn’t say that at all. You can live with that one yourself.”

One would safely bet that Warren Gatland and his assistant coaches would dispute this, for most of the penalties conceded were eminently avoidable, and merely contributed to the hole the Lions dug for themselves in the third quarter before recovering from 18-9 down with two superb tries. The first, by the by, was when both teams were reduced to 14 men.

As for cynically conceded penalties to deny try-scoring chances, the most blatant was probably Aaron Cruden running across Liam Williams and body-checking him to the ground from a kick through.

Nope, that wasn’t highlighted or shown either.

Admittedly, Rarere did concede: “There’s probably loads of Irish people just looking at us laughing, going: ‘Look at them now. The ball is on the other foot’.”

Against this backdrop, there was no rancour from Steve Hansen this week towards the Lions or Warren Gatland, despite invitations to condemn what was received as foul play, notably Mako Vunipola on Beauden Barrett last Saturday.

Some sort of sanity prevails.