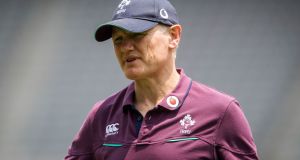 “We’ve kept in contact with Joe about the job, like we’ve kept in touch with Vern Cotter and others.” Photo: Inpho

The New Zealand Rugby Union have revealed they have stayed in regular contact with Schmidt as they prepare for life without Hansen following the tournament in Japan.

Before the start of the Lions tour the organisation also said that they were considering touring coach Warren Gatland for the top job.

Schmidt’s back-to-back Six Nations title successes with Ireland in 2014 and 2015, plus his win over the world champions in Chicago last November, have catipulted him to the front of the queue to take over the country of his birth. Hansen is expected to leave his job in charge of the All Blacks within the next two years, with discussions as to who will succeed him expected to start soon after the current series with the British & Irish Lions.

“You’d have to ask Joe if he wants to apply for the job, but he’s obviously a very good coach,” said New Zealand Rugby Union chief executive Steve Tew.

“We’ve kept in contact with Joe about the job, like we’ve kept in touch with Vern Cotter and others. Where do I start and stop? There’s Jamie Joseph, there’s Warren Gatland, there’s Pat Lam and others and we will consider a number of options. Joe is among those options.

“We’ll be having a conversation with our board in the second half of this year about the process that will run. Then we’ll make that known to everybody once it’s done and dusted.”

Schmidt, who was born in Woodville, New Zealand, has had a hugely successful coaching career in the northern hemisphere with Clermont Auvergne, Leinster and Ireland.

His Ireland contract runs up until the 2019 World Cup – Wales coach and current Lions boss Gatland is in the same position – and that that year is likely to mark a significant reshuffle in international coaching. Hansen’s current assistant Ian Foster is also in the running to take over the All Blacks, but the world’s best side are already looking at the other options available to them.

As one of the few coaches to have recently got the better of New Zealand, Schmidt is among the men leading the way for the position. Gatland’s second Test win with the Lions in Wellington has also done him no harm with the 53-year-old expected to leave his position with Wales in two years’ time.

“I’m sure Steve will voice his opinion about who will be the next coach because he has invested a huge amount in this team,” Tew added.

“He won’t have a vote, but his experience and understanding of the side means he will be someone who will be consulted. At this stage we’re not quite sure when the running for the job will begin because Steve hasn’t quite decided on a final decision about his future.

“He and this group are appointed until the next Rugby World Cup and in the near future we will make a decision about who to appoint.”

“I think Joe is someone who might have that, but we would hope all the New Zealand coaches who are offshore would be keeping an eye on the job and considering it as an option. Ultimately it will come down to who applies, who we see as the best candidate, and who has the best team around them to take the team forward.”