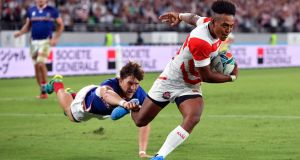 The first Rugby World Cup ever to be staged in Asia is under way and the host nation have duly delivered the result the tournament organisers needed. First impressions are considered very important in Japanese culture and, while their overall performance was not exactly a technicolour dream for their coach Jamie Joseph, the Brave Blossoms’ bonus-point victory will have focused a few minds among their fellow Pool A occupants Ireland and Scotland.

There is still a fair way to go before Joseph realises his goal of steering Japan into the World Cup knockout stages for the first time but there were enough positive signs to enthuse a stadium almost entirely populated with excited red-and-white clad supporters. Right-winger Kotaro Matsushima claimed three of his side’s four tries to earn himself the honour of scoring the first hat-trick by any Japanese player at a World Cup.

Unlike their epic 2015 pool victory over South Africa in Brighton, no last-ditch miracles were required this time but Russia deserved considerable credit for keeping the contest alive into the final quarter. They gave Japan problems aerially in the first half and never gave up at any stage. Their skipper Michael Leitch will know that improvements will be required to unsettle the Irish on Saturday week but as far as their supporters are concerned the show is firmly on the road.

The main barrier to Japanese satisfaction was always likely to be first-night nerves. Leitch freely admitted to being disconcerted by the scale of the pre-match interest – “I’ve been making all sorts of mistakes in training; there are so many people and so many cameras” – but even he could not have foreseen his side’s distinctly shaky start after emerging from the most spotless home dressing-room ever seen at a major sporting event.

Having made a mess of the opening kick-off, the hosts were seven points down inside the first five minutes after their full-back William Tupou totally misjudged a Russian up and under and winger Kirill Golosnitskiy pounced on the loose ball to earn himself the distinction of claiming the fastest try ever scored in an opening World Cup game. Only when Timothy Lafaele threw a lovely backhand offload out of a tackle to give Matsushima enough space to cruise over wide on the right did the anticipated script finally begin to materialise.

The Russian coach Lyn Jones, a familiar figure at Neath and London Welsh in a previous life, had instructed his players to go out and perform with no fear and the message seemed to have sunk in. They certainly defended with spirit, not least their powerful openside Tagir Gadzhiev who originally hails from Dagestan on the shores of the Caspian Sea and has a background in mixed marshal arts. Any British or Irish club seeking back-row reinforcements should definitely take a look.

Japan, for their part, were busy and willing without always displaying the composure that sets the really good sides apart. There were no available weather-related excuses on a dry evening aside from a slight breeze but it was frustratingly typical when good approach work ended with Matsushima failing to ground the ball over the try-line to the satisfaction of the television match official. Luckily for his peace of mind, the winger was swiftly presented with another chance on the same part of the field and made no mistake to steer Japan into a 12-7 lead at the interval.

The second-half was always going to be a test of Russian fitness but in the remarkable Gadzhiev they had a relentless beacon of resistance. Only in the aftermath of a 47th-minute turnover and galloping score for Japan’s flanker Pieter Labuschagne did the margin begin to inflate, a tired clearance from Russia’s captain Vasily Artemyev giving Matsushima the chance to add his third try 11 minutes from time.

To say Russia will not have long to dwell on this outcome is an understatement. The tournament schedule has them back at it on Tuesday against Samoa in Kumagaya, a desperately tight turnaround in anybody’s language. No one will be rushing down to the bookmakers to put money on them winning a pool game but, on this evidence, those backing them to concede a bucketload of points in the pool stages may be disappointed. Jones has clearly got them playing for each other, which is always half the battle.

It would have taken a stony heart, either way, not to marvel at how the World Cup has grown since its one-man-and-a-dog first edition in 1987. The genuine joy on the faces of the local kids during the opening ceremony, the widespread pride at the tournament’s arrival in Asia and Bill Beaumont addressing a packed stadium in Japanese were all, let’s face it, a distant dream not all that long ago. As the great Richie McCaw himself hoisted the Webb Ellis Cup on to its plinth, the only missing element was any clue as to who will lift the trophy in Yokohama on November 2nd. - Guardian